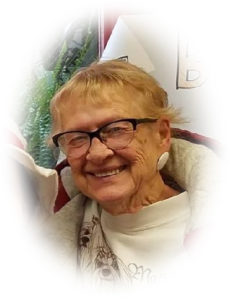 RECORDED MEMORIAL SERVICE
(Click Here – You will be redirected to VIMEO)

Freda Carroll “Carol” Von Eschen, the daughter of Fred and Nettie (Jackson) Smith, was born on April 14, 1939, in Coin, Iowa. She attended Coin Public Schools and graduated with the Class of 1957. Carol then married Dana A. Bain, and three sons were born to this union. The couple later divorced.

In 1970, Carol moved to Shelby, Iowa. She worked as a Northwestern Bell telephone switch operator and later, as a lineman. On May 29, 1976, Carol married Delmar Lee Von Eschen at the Methodist Church in Shelby. The couple farmed, and Carol helped around the farm in whatever way she was needed.

Carol was a member of the First Presbyterian Church in Shelby, Iowa. She was also a longtime member of the Women’s Federated Club of Shelby. Carol was a very talented seamstress and quilter; her many creations included suits, wedding dresses, general clothing and furniture upholstery. She was a wonderful cook and baker who loved spending time with her family, especially during the holidays. Eager to try or do anything, Carol had proudly served as an EMT with the Shelby Volunteer Fire Department for many years, and was also an excellent marksman and hunter.

The memorial service was held on Thursday, July 1, 2021, at the First Presbyterian Church in Shelby, Iowa, with Pastor Heather Ploen of United Lutheran Church, Shelby, Iowa, officiating. Georgene Juhl was the musician, and Chyann Bain was the special speaker. The “Last Page” call by Shelby Fire and Rescue and burial of ashes was held at the Shelby Cemetery, Shelby, Iowa. The Burmeister-Johannsen Funeral Home of Harlan and Shelby, Iowa, was in charge of the arrangements. Condolences may be left online at www.burmeisterjohannsen.com.