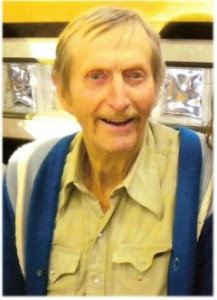 Gaylord LaVerne Heilesen, the son of Arthur Clarence and Mary Elizabeth (Constable) Heilesen, was born on April 26, 1924, on the family farm located east of Kirkman, Iowa. He attended country school and graduated from Kirkman High School in 1941. Gaylord farmed, first with his father, and later in partnership with his brother, Merlyn.

On March 2, 1952, Gaylord married Maxine Augusta Eggerss in Avoca, Iowa. The couple lived on the farm until February 15, 2010, when they moved to Irwin, Iowa, following a fire on the farm. Gaylord became a resident of the Manilla Manor in Manilla, Iowa, on September 7, 2010.

Gaylord was a member of the Irwin Church of Christ in Irwin, Iowa, where he had served as a deacon and trustee. He was the former president of the Midwest Quarter Horse Breeders Association, and had served as a Douglas Township trustee and a member of the Kirkman Fire Department. Gaylord had also been a Shelby County Fair Board member, a Myrtue Medical Center board trustee, and a FMCTC board member. He enjoyed raising and showing quarter horses and attending farm and horse auctions.

Gaylord L. Heilesen died on Saturday, October 2, 2010, at the Manilla Manor in Manilla, Iowa, having reached the age of 86 years, 5 months, and 6 days.

Funeral services were held on Thursday, October 7, 2010, at the Irwin Church of Christ in Irwin, Iowa, with Rev. Ted Sieck officiating. Peggy Ahrenholtz served as the organist. Casket bearers were John Davey, Glenn Davey, Gene Davey, Craig Bower, Marty Davey, Robert Davey, David Heilesen, and Douglas Heilesen. Burial was in the Oak Hill Cemetery in Irwin, Iowa. The Burmeister-Johannsen Funeral Home in Harlan was in charge of the arrangements. Condolences may be left online at www.burmeisterjohannsen.com.