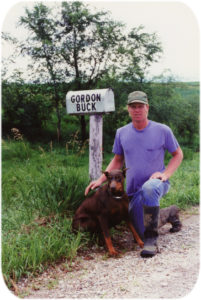 Gordon “Gordy” Lee Buck, the son of Roscoe Harold and Loretta Mae (Fries) Buck, was born on October 12, 1962, in Harlan, Iowa. He attended Shelby (Iowa) Public Schools, and graduated from Shelby High School with the Class of 1981. In September 1981, Gordy began working at Oakland Foods in Oakland, Iowa. From 1984-1989, he was employed by Dupaco Packing in Denison, Iowa, and from July 1989 until the present, he worked at Farmland. He also worked part-time for area farmers and Remington Seed Company.

Gordy was a lifelong Shelby and Tennant area resident, living in Tennant until 1984, when he moved to an acreage west of Tennant; it was there that he raised cattle and two horses. A very hard worker “from sun up to sun down”, Gordy had a true love of farming and cattle. He traveled to many fairs such as the Iowa State Fair, Shelby County Fair, Iowa Beef Expo, Clay County Fair, and Nebraska State Fair. Gordy also attended many open shows to see his grandkids compete; he was deeply proud of all four grandchildren.

Gordy was a member of the Tennant Racing team, driving Orange #30. He started racing in 1992, and raced at the Shelby County Speedway and Crawford County Speedway. At both tracks, he did well at holding top ten in points for eight years. In 1997, Gordy won the overall points at Crawford County, which was considered a NASCAR track at that time, and his name was published in the NASCAR magazine.

Gordy will be remembered by friends and family as a quiet man who always smiled in all circumstances.

Gordy was preceded in death by his parents, and one brother, Steven Buck. He is survived by one daughter, Erin Buck of Tennant, Iowa; two brothers, Gerald (Kim) Buck of Shelby, Iowa, and Dana Buck of Tennant, Iowa; one sister, Connie (Tracey) McMorran of Bettendorf, Iowa; four grandchildren, Brooklyn Buck, Kendra Robinson, Cooper Robinson, and Reagan Robinson; his former wife, Trudi Buck of Harlan, Iowa; and other relatives and friends.