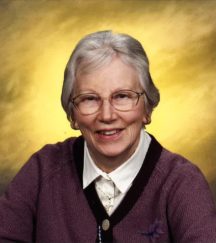 Virginia Anne Johnson, the daughter of Joseph Franklin and Clara Lillian (Ohms) Petersen, was born on December 8, 1928, in Harlan, Iowa. She graduated as Valedictorian of the Harlan High School Class of 1946, and then attended Dana College in Blair, Nebraska, for one year.

On June 22, 1947, Virginia married Richard Henry “Fritz” Johnson at the Bethlehem Lutheran Church in Jacksonville, Iowa. The couple moved to Oakland, Iowa, in 1955, where she worked in clothing sales and was active in the Oakland United Methodist Church. In 1977, Fritz and Virginia moved to Jackson Township in Shelby County, Iowa. Following Fritz’s death on January 6, 2000, Virginia stayed on the farm for another two years. In 2002, she moved into Harlan, and in 2014, became a resident of the Elm Crest Retirement Community in Harlan.

Virginia was an active member of Bethlehem Lutheran Church in Jacksonville, Iowa, where she had served as a Sunday School teacher and took part in the various activities of the Bethlehem Lutheran Church Women. She was active in 4-H while growing up, and later was a 4-H Leader and Cub Scout Den Mother. Virginia enjoyed quilting with the church women. She and Fritz also liked to spend time tending their vegetable and flower gardens.

Virginia A. Johnson died on Sunday, March 14, 2021, at the Elm Crest Retirement Community in Harlan, Iowa. She had reached the age of 92 years, 3 months, and 6 days.