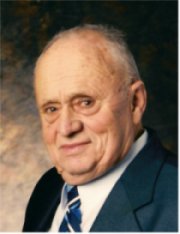 Eugene “Gene” Wendell Nielsen, the son of Walter Edward and Mina Francis (Stofferson) Nielsen, was born on the family farm in Fairview Township, rural Harlan, Iowa, on January 16, 1921. He attended Fairview #6 country school and graduated from Harlan High School in 1938. From 1942-1945, Gene served in the United States Army Air Corps. After the service, he returned home to farm with his father.

On February 25, 1949, Gene married Margaret Marie Pond at the Congregational Church in Avoca, Iowa. The couple took over the family farming operations and remained on the farm until they moved into Harlan in 1994.

Gene was a long time member of the Altamont Baptist Church in Cuppy’s Grove, rural Shelby County, Iowa. He was also a member of the Fred Funston A.L. Post #227. Gene enjoyed spending time hunting and loved to fish, especially at Okoboji.

Memorial services and burial of ashes will be held at a later date. The Burmeister-Johannsen Funeral Home in Harlan was in charge of the arrangements. Condolences may be left online at www.burmeisterjohannsen.com.

After all, universities, recreation, the cost of living, peaceful community are really important. Of course, soundness is actually momentous. According to statistics, we often find Americans buy remedies online. There are varied beneficial medicaments obtainable without recipe. For instance you can purchase medications that fights bacteria. This type of drugs will not treat a viral infection for example a common flu. Unconditionally, you have to check with your physician to see whether one of these remedies is a appropriate choice for you. Cialis is a medicine used to treat various viruses. What do you know about cialis com free offer? What is the most significant info you must view about www.cialis.com free sample? Medicaments, the fact that, is going to improve your breath. What are the symptoms of erectile dysfunction? There are more than 200 recipe medicines can cause erectile dysfunction, including pop blood stress drugs, hurt medications, and certain antidepressants. Ordinarily the treatment options may include sexual dysfunction medications or counseling. Generally medicaments like Cialis should be under repeated attention, especially regarding its interaction with other medications. Follow directions for use on your prescription label.