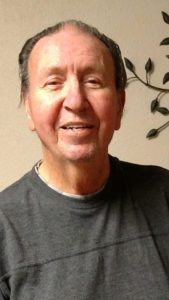 James Nelson Shelley, son of Frank and Opal (Thompson) Shelley, was born on March 22, 1939, in Ponca City, Oklahoma. He attended schools in Omaha, Nebraska, and graduated from Omaha West High School in 1957. James continued his education, attending the University of Nebraska in Omaha. He began his career in the beef industry as an apprentice butcher at Safeway Grocery in Omaha, and he was soon recruited as a beef buyer for Safeway in Chicago, Illinois. James later returned to Omaha and sold boxed beef for the American Beef Packers. In 1974, he took a position in sales for Iowa Beef Processing (IBP) in Sioux City, Iowa. Following retirement, James moved to Avoca, Iowa.

James served his country as a member of the National Guard for six months in 1961-62. James married Kathleen McNamara in Logan, Iowa, on February 11, 1962. They divorced in 1991, and he never remarried.

There was nothing James loved more than hunting pheasant, quail, and ducks. In his older years when he was unable to hunt, he loved to observe wildlife in their natural habitat. He could sit for hours by a lake or field watching all kinds of wildlife. He loved to retell hunting stories and times spent hunting with his boys. In addition to telling hunting stories, James loved to tell jokes, and he would never miss an opportunity to joke with any salesperson, bank teller, grocery store clerk, shop owner, or stranger on the street. His sarcasm and joke telling were his hallmark. James was especially proud of the work he did in the beef industry throughout his career, especially his work at Iowa Beef Processing.

James N. Shelley died on Friday, December 4, 2020, at the University of Nebraska Medical Center in Omaha, Nebraska. He was 81 years old.

James was preceded in death by his parents; two brothers, Vernon Shelley and Gene Shelley; and one sister, Eileen Chedester. He is survived by three sons, Kevin (Lucia) Shelley of Bismarck, North Dakota, Greg (Stacy) Shelley of Trumansburg, New York, and Gino (Phet) Guiney of San Diego, California; and one sister, Raelene Carstensen of Shelby, Iowa.

James chose cremation, and no services are planned. The Burmeister-Johannsen Funeral Home, Inc. in Harlan, Iowa, was in charge of the arrangements. Condolences may be left online at www.burmeisterjohannsen.com.