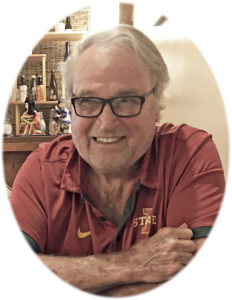 PRIVATE SERVICES WILL BE HELD

Terry Len Heilig, son of Donald George and Vera Ruth (Buck) Heilig, was born on February 15, 1947, in Council Bluffs, Iowa. He attended Shelby (Iowa) Public Schools through the fifth grade, before attending Elk Horn (Iowa) Public Schools, graduating in 1965. Terry received his Bachelor of Science Degree in Business Management from Iowa State University in Ames, Iowa, in 1969. He worked for the Ford Motor Company in Omaha, Nebraska, until 1978, when he moved to Perry, Iowa, to run his own Ford dealership. In 1987, Terry moved to Oklahoma, and worked in the field of economic development throughout the state of Oklahoma.

Terry married Claire Knudsen in June 1968, and the couple became the parents of two children, Amy and Chris. They were married for 26 years before later divorcing.

Terry was a member of the Oklahoma Business Incubator Association (OBIA) and served as the organization’s president in 1989. He enjoyed outdoor activities, especially boating, hunting, and fishing; he also liked to snow and water ski when he was younger. Terry was an avid Iowa State fan. He loved animals including his beloved dog, Buddy. Terry loved entertaining and hosting gatherings for his family and friends.

Terry was preceded in death by his father. He is survived by his mother, Vera (Wayne) Raasch of Harlan, Iowa; his fiancée, Lynda King of Eufaula, Oklahoma; one daughter, Amy (Jim) Adamson of Adel, Iowa; one son, Chris (Jessica) Heilig of Flower Mound, Texas; one brother, Dan (Ruth) Heilig of Elk Horn, Iowa; four grandchildren, Molly, Michael, Cole, and Reed; and other family and friends.