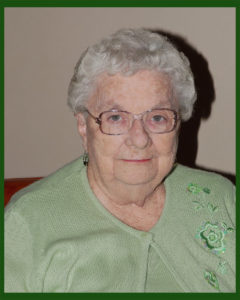 CELEBRATION OF LIFE SERVICES WILL BE HELD AT A LATER DATE

Mildred Louise Lesch, daughter of Sela R. and Francis (Dyer) Miles, was born on August 22, 1930, in Elwood, Nebraska. She attended Sunny Dale country school before moving to Cozad, Nebraska, where she finished high school. For a time, Mildred worked at Watson Bro. Trucking Company in Omaha, Nebraska, as a bookkeeper.

On November 20, 1954, Mildred married Frank Henry Lesch in Waterloo, Nebraska. The couple lived in Waterloo, where they ran a 50-acre truck garden. In 1968, they moved to an acreage south of Shelby, Iowa. Mildred then worked as a cook at the Shelby School for seven years. In 1991, Mildred and Frank moved into town, and she became a caregiver for REM Leadway in Shelby, a position she held for 15 years. She also cleaned the Shelby Community Center.

Mildred was a member of United Lutheran Church in Shelby, Iowa. She enjoyed playing cards in various card clubs, and served as treasurer of the Senior Citizen Club. Mildred was a great cook who really liked to eat a good tomato. She and Frank liked to go camping, and often took the grandchildren along with them. Mildred took great pleasure in being available to babysit the grandchildren and attend their activities.

Mildred was preceded in death by her parents; her husband, Frank Henry Lesch, on January 15, 2013; and one brother, Ronald Miles. She is survived by two sons, Frank (Pamala) Lesch and Mitchell Lesch, both of Shelby, Iowa; one sister, Alice Maaske of Cozad, Nebraska; four grandchildren; eight great-grandchildren; and other relatives and friends.

Celebration of Life services will be held at a later date. Burmeister-Johansen Funeral Home, Inc., of Shelby, Iowa, was in charge of arrangements. Online condolences may be left online at www.burmeisterjohannsen.com.