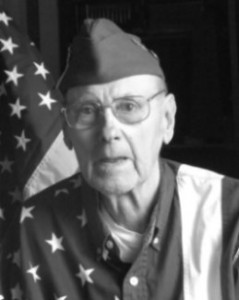 Adolph Raymond Polacek, the son of John and Annastasia (Ostry) Polacek, was born on December 30, 1921, in Weston, Nebraska. He was raised and attended school in Bruno, Nebraska. Adolph joined the Army during World War II and was stationed in the Aleutian Islands. He married Matilda Sabata.

Following his discharge from the Service, he lived in David City, Nebraska, for several years. Adolph then moved to Omaha, Nebraska, where he worked as a cabinet builder and installer for Western Laminates; he retired in 1982. In 2002, he moved to Shelby, Iowa, to be closer to family.

Adolph was a lifetime VFW member. He liked polka music, playing the accordion and singing, and gardening. Adolph especially enjoyed working with his hands on projects.

Funeral services were held on Saturday, May 26, 2012, at the Burmeister-Johannsen Funeral Home in Shelby, Iowa, with Pastor Carol J. Fox of the First Assembly of God, Harlan, Iowa, officiating. Casket bearers were Jim Fox, Bill Fox, Tom Lee, Lance Buck, Paul Polacek, and Thaddeus DeBolt. Burial was in the Shelby Cemetery in Shelby, Iowa, with military graveside rites performed by the American Legion Post #240 of Shelby. The Burmeister-Johannsen Funeral Home in Shelby was in charge of the arrangements. Condolences may be left online at www.burmeisterjohannsen.com.

After all, universities, recreation, the cost of living, peaceful community are really great. Of course, heartiness is actually momentous. According to statistics, we often find Americans buy remedies online. There are varied beneficial medicaments obtainable without prescription. For instance you can purchase medications that fights bacteria. This type of drugs will not treat a viral contagion for example a common flu. Unconditionally, you have to check with your physician to see whether one of these remedies is a appropriate choice for you. Cialis is a medicine used to treat various viruses. What do you know about cialis com free offer? What is the most significant info you must consider about www.cialis.com free sample? Medicaments, the fact that, is going to improve your life. What are the symptoms of erectile dysfunction? There are more than 200 recipe medicines can cause erectile dysfunction, including popular blood pressure drugs, pain medications, and certain antidepressants. Ordinarily the treatment options may include sexual dysfunction medications or counseling. Generally medicaments like Cialis should be under repeated attention, especially regarding its interaction with other medications. Follow directions for use on your prescription label.