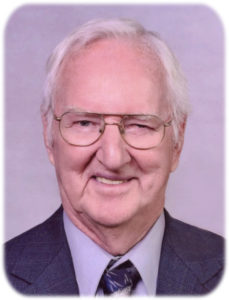 Masks are required at visitation.
CDC Guidelines will be observed at all times.

Gerald “Jerry” Gilbert Kloewer, son of Frank and Anna (Rau) Kloewer, was born on July 29, 1926, in rural Westphalia, Iowa. He attended country school through the eighth grade and then farmed with his father. He also helped on neighbors’ farms. From October 1950 through October 1952, during the Korean Conflict, Jerry served in the United States Army; he received a Bronze Star for his service.

On March 2, 1954, Jerry married Izetta Pauline Fouts at St. Patrick’s Church in Dunlap, Iowa. The couple eventually made their home in Irwin, Iowa, where Jerry worked as a carpenter and began farming his own land near Irwin. He always took great pride in keeping his farm in tip-top shape, and continued to do so until his retirement in 1988.

Jerry was a member of St. Michael’s Catholic Church in Harlan, Iowa, and as a younger man, had been active with the Knights of Columbus in Earling, Iowa. A quiet and reserved individual, Jerry preferred to lead and parent by example. He enjoyed watching his grandchildren’s sports games, playing cards with friends, and golfing. For many years, he and Pauline would often attend square dances. More recently, the couple spent their winter months in Mission, Texas. Locally, Jerry and Pauline often volunteered by delivering meals for the Harlan Senior Center.