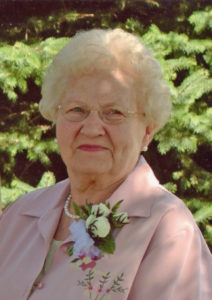 A PRIVATE GRAVESIDE SERVICE WILL BE HELD

Verda Mae Larsen, daughter of Horace and Rose (Johnson) Petersen, was born on December 23, 1927, in rural Harlan, Iowa. She attended Jackson #1 rural school through the eighth grade, and graduated from Harlan High School in 1946. Verda took continuing education classes through Drake University in Des Moines, Iowa, and taught rural school for four years and substituted at New Park School for one year.

On March 14, 1948, Verda married James Richard Larsen at Bethlehem Lutheran Church in Jacksonville, Iowa. The couple farmed in Jackson Township, Shelby County, Iowa, for 15 years before moving to their farm in Center Township, north of Harlan in 1963. James died on October 14, 2011, in Harlan, and Verda moved into the Westridge Apartments in Harlan in April 2017.

Verda was an active member of Immanuel Lutheran Church in Harlan, where she served on many boards and taught Sunday School. She was a member of Myrtue Medical Center Auxiliary and volunteered for the bloodmobile. Verda often cleaned for and generally helped elderly friends. She loved to sew, quilt, knit, scrapbook, and work in her garden. Verda greatly enjoyed cooking and baking for family and friends, and she made sure everyone got something to eat when they came to visit. She especially treasured time spent with her family.

Verda was preceded in death by her parents; her husband, James Larsen; 11 siblings; and two grandchildren. She is survived by one daughter, Marie (Warren) Madsen of Newton, Iowa; two sons, Philip (Genene) Larsen of Fontana, California, and Scott (Jeanine) Larsen of Harlan, Iowa; one sister, Lile (Richard) Petersen of Kirkman, Iowa; seven grandchildren; 14 great-grandchildren; and other relatives and friends.

A private graveside service was held at the Harlan Cemetery, Harlan, Iowa, with Pastor Phillip Nielsen of Immanuel Lutheran Church, Harlan, officiating. Condolences may be left online at www.burmeisterjohannsen.com.