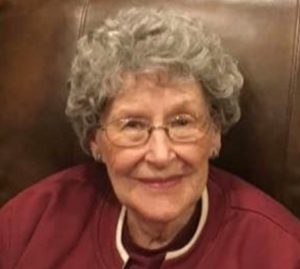 NO VISITATION WILL BE HELD

A PRIVATE GRAVESIDE SERVICE IS PLANNED

Helen Avis Fischer was born November 7, 1928, at her parents’ farmhouse in Pender, Nebraska. She was the oldest child of John and Ruth (Brown) Shemat, and her father lovingly called her Punkin’ throughout her childhood. She would often talk of her life as a farmer’s daughter during the Great Depression and how lucky she was that her dad was always able to provide for the family because they had cattle and could grow their own crops.

Helen graduated from Bancroft High School in 1946 and then attended and graduated from Wayne State Teacher’s College in Wayne, Nebraska, in the winter of 1947. It was not easy to find a job half way through a school year so her first teaching job as a new graduate took her to Manning, Iowa, where she taught 3rd grade at the country school. It was in Manning that she met her future husband, Earl Fischer, at the roller skating rink in 1949. They were married on July 30, 1950, in a small ceremony in Bancroft.

Helen and Earl moved to Harlan in 1960 after purchasing the Harlan Monument Works. Helen was Earl’s bookkeeper and business partner, but her full time job was being a stay at home mom to their 3 children, Sandy, Allan, and Karla. In 1975, they sold the monument business and started a cemetery lettering business, Fischer Cemetery Lettering. This allowed them free time to spend winters in Alamo, Texas, for 26 years.

Helen’s hobbies included traveling in their camper throughout the US and Canada with the Coachmen and Good Sam Clubs. She also was an avid bridge player, a golfer, and enjoyed making and painting wooden crafts with Earl. Helen went back to college at Iowa Western Community College and obtained her LPN license in 1980, not to work in nursing, but so that she could learn medical terminology and understand when her daughters would talk about their nursing careers.

Helen was preceded in death by her parents and her husband of 64 years, Earl in 2015. Also preceding her in death were her son, Allan Fischer, her son-in-law, Dan Nelson, and great-granddaughter, Alexis Hembree. She is survived by daughters Sandy (Tom) Cuscino of Harlan and Karla (Mike) Dillard of Iowa City, grandchildren Corey, Carrie, Cayley, Cassie, Tara, Nathan, and Sean, as well as 17 great-grandchildren.

There was no visitation and private family graveside services were held. The Burmeister-Johannsen Funeral Home in Harlan, Iowa, was in charge of the arrangements. Condolences may be left online at www.burmeisterjohannsen.com.