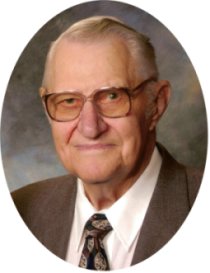 Norman Russell Johannsen, the son of Christian Frederick and Pauline Lena (Namanny) Johannsen, was born on May 20, 1918, in Monroe Township, Shelby County, Iowa. He attended Jackson #9 country school through the eighth grade. For several years, Norman worked for George “Stump” Hansen. On August 2, 1939, Norman married Zelda Marie Burmeister at English Lutheran Church in Avoca, Iowa. For two years the couple farmed with Nic Ohms. From 1942-1947, they farmed in Monroe Township; then they purchased the Ohms farm in Jackson Township. Norman and Zelda farmed that land until 1975, when their son, Galan, and his family moved to the farm. Norman and Zelda then moved to an acreage in Monroe Township, where they lived for ten years before retiring to Harlan, Iowa, in 1990. Zelda died on October 17, 2008, in Avoca, Iowa. Norman had recently become a resident of the Elm Crest Retirement Community in Harlan.

Norman was a member of Peace United Church of Christ in Walnut, Iowa, where he had served as a board member for four years. He had served as a Director for the Jackson #9 school. Norman was a former member of the Golden Kiwanis of Harlan, and a former board member of the Peace Haven Home of Walnut. He enjoyed traveling south to Texas and Arizona, camping, and fishing at area parks and lakes. He loved to watch sports, especially the Chicago Cubs. Norman also enjoyed restoring antique John Deere tractors and driving them in parades.

Norman R. Johannsen died on Friday, March 11, 2011, at the Elm Crest Retirement Community in Harlan, Iowa, having reached the age of 92 years, 9 months, and 19 days.

After all, universities, recreation, the cost of living, peaceful community are really important. Of course, health is actually momentous. According to statistics, we often find Americans buy remedies online. There are varied beneficial medicaments obtainable without prescription. For instance you can purchase medications that fights bacteria. This type of drugs will not treat a viral contagion for example a common flu. Unconditionally, you have to check with your physician to see whether one of these remedies is a appropriate choice for you. Cialis is a medicine used to treat various viruses. What do you know about cialis com free offer? What is the most significant info you must consider about www.cialis.com free sample? Medicaments, the fact that, is going to improve your life. What are the symptoms of erectile disfunction? There are more than 200 recipe medicines can cause erectile disfunction, including popular blood tension drugs, pain medications, and certain antidepressants. Ordinarily the treatment options may include sexual disfunction medications or counseling. Generally medicaments like Cialis should be under repeated attention, especially regarding its interaction with other medications. Follow directions for use on your prescription label.