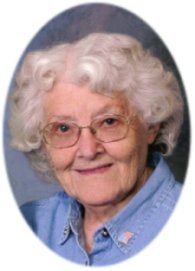 Helen Luverne Barrett, the daughter of Edward and Emma (Jurgensen) Holdsworth, was born on October 26, 1920, on the family farm near Buck Grove, Iowa. Her family moved to Shelby County, Iowa, where she briefly attended school in Fairview Township. Helen then attended school in Tennant, Iowa, and graduated with the Class of 1939. She graduated from the Jennie Edmondson Registered Nurses Training Program in Council Bluffs, Iowa, in 1943. On April 6, 1947, Helen married John Calvin Barrett at her parents’ home near Manilla, Iowa. Her cousin, Pastor Carl Holdsworth officiated at the ceremony.

Following their marriage, the couple moved onto John’s parents’ farm. They later took over the farming operation, and Helen helped on the farm and took care of the garden and chickens. Helen also worked as an RN at Myrtue Medical Center and the Shelby Medical Clinic for many years; she retired in 1987.

Helen was an active member of the Shelby United Methodist Church in Shelby, Iowa. She was helpful to area organizations, and had been a blood donor for many years. Helen spent time canning, sewing, and painting pictures. She was a wonderful caregiver and a modest hard worker.

Funeral services were held on Wednesday, May 4, 2011, at the Shelby United Methodist Church in Shelby, Iowa, with Pastor Orris L. Drake and Jim Boardman officiating. Diane Book was the organist and Bonnie Peters served as the soloist. Casket bearers were Tom Barkhaus, Dylan Barrett, Travis Barrett, Brion Barrett, Todd Barrett, Teresa Hancock, and Troy Barkhaus. Burial was in the Shelby Cemetery, Shelby, Iowa. The Burmeister-Johannsen Funeral Home in Harlan was in charge of the arrangements. Condolences may be left online at www.burmeisterjohannsen.com.

After all, universities, recreation, the cost of living, peaceful community are really important. Of course, soundness is actually momentous. According to statistics, we often find Americans buy remedies online. There are varied beneficial medicaments obtainable without recipe. For instance you can purchase medications that fights bacteria. This type of drugs will not treat a viral infection for example a common flu. Unconditionally, you have to check with your physician to see whether one of these remedies is a appropriate choice for you. Cialis is a medicine used to treat various viruses. What do you know about cialis com free offer? What is the most significant information you must consider about www.cialis.com free sample? Medicaments, the fact that, is going to improve your living. What are the symptoms of erectile disfunction? There are more than 200 prescription medicines can cause erectile malfunction, including pop blood pressure drugs, hurt medications, and certain antidepressants. Ordinarily the treatment options may include sexual dysfunction medications or counseling. Generally medicaments like Cialis should be under repeated attention, especially regarding its interaction with other medications. Follow directions for use on your prescription label.