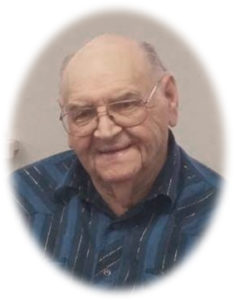 Cy first worked for area farmers, and then for Friendly Foods Stores and Square Deal Grocery Stores for Ouren Goodrich. In 1960, Mr. Goodrich transferred the Butler family to Harlan, Iowa, where Cy served as the meat manager for Goodrich Grocery Store (later known as Olson’s Grocery Store). Following the grocery store’s closing, he was employed as a meat cutter at Jim’s Wholesale Meats in Harlan. Cy later worked for Darwin Larsen at the Car Connection in Harlan.

Cy’s wonderful sense of humor showed through his sharing of smiles and jokes. Known to many as “The Candy Man”, Cy was often seen walking around Harlan with his small dog, “Tina”, handing out candy. The riding lawn mower he inherited from his father was his pride and joy, and he loved using it to give his grandchildren rides around the block. Family and friends were important to him and he treasured spending time with them.

A graveside service and burial was held on Monday, May 11, 2020, at the Harlan Cemetery, Harlan, Iowa. Rev. Hank Gruver led the service. Cy’s loving grandsons and granddaughters served as casket bearers. The Burmeister-Johannsen Funeral Home in Harlan, Iowa, was in charge of the arrangements. Condolences may be left online at www.burmeisterjohannsen.com.