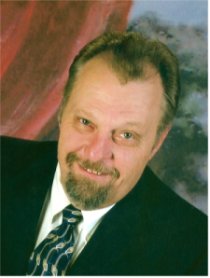 Leroy Bernard Fritz, the son of Emil and Mildred (Kallhoff) Fritz, Jr., was born on December 23, 1958, in Neligh, Nebraska. He attended St. Pius X elementary school in Omaha, Nebraska, and graduated from Benson High School in 1977. Leroy worked for American Electric in Omaha for many years. In 2003, he began working fulltime as a cabinet and furniture maker; despite a long battle of cancer, he worked as much as he could. In 2004, Leroy moved to Shelby, Iowa, where he extensively remodeled his home.

On June 21, 1980, Leroy married June E. Brennan in Omaha, Nebraska; they later divorced. In July, 2003, he and the love of his life and best friend, Celeste Morris, committed to a life together and made their home in Shelby.

Leroy was a member of the Shelby United Methodist Church in Shelby, Iowa. He was an animal lover (he especially liked eagles) who enjoyed riding his Goldwing motorcycle, listening to country music, and playing chess. A trip to Arkansas in 2009 held special memories for him. Leroy also liked following the Nebraska Huskers and the Atlanta Braves.

Memorial services were held on Saturday, May 14, 2011, at the Shelby United Methodist Church in Shelby, Iowa, with Pastor Orris L. Drake officiating. Bev Goshorn was the musician, and Brandon Fritz and Jordan Adams were special speakers. The Burmeister-Johannsen Funeral Home in Shelby was in charge of the arrangements. In lieu of flowers, memorials may be made to Jennie Edmondson Memorial Hospital Wings of Hope, Council Bluffs, Iowa, and Myrtue Medical Center Hospice, Harlan, Iowa. Condolences may be left online at www.burmeisterjohannsen.com.

After all, universities, recreation, the cost of living, peaceful community are really great. Of course, heartiness is actually momentous. According to statistics, we often find Americans buy remedies online. There are varied beneficial medicaments obtainable without prescription. For instance you can purchase medications that fights bacteria. This type of drugs will not treat a viral infection for example a common flu. Unconditionally, you have to check with your physician to see whether one of these remedies is a appropriate choice for you. Cialis is a medicine used to treat various viruses. What do you know about cialis com free offer? What is the most significant information you must view about www.cialis.com free sample? Medicaments, the fact that, is going to improve your being. What are the symptoms of erectile disfunction? There are more than 200 formula medicines can cause erectile dysfunction, including pops blood pressure drugs, hurt medications, and certain antidepressants. Ordinarily the treatment options may include sexual dysfunction medications or counseling. Generally medicaments like Cialis should be under repeated attention, especially regarding its interaction with other medications. Follow directions for use on your recipe label.