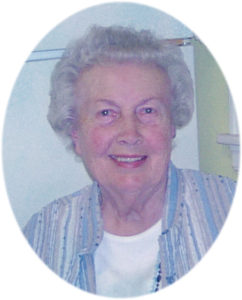 SERVICES WILL BE HELD AT A LATER DATE

Betty Maxine Stuhr, daughter of Eiler M. and Lillie C. (Strohbehn) Jacobsen, was born on September 18, 1925, in Havens, Nebraska. She attended Country School #40, and graduated from Silver Creek (Nebraska) High School in 1943. Betty then taught country school for two years before enrolling in the Cadet Nurse Program at Immanuel Hospital in Omaha, Nebraska, in 1945. Following completion of the program in 1948, she was employed as a Registered Nurse by the Visiting Nurse Association, and continued in this position until her marriage.

On June 5, 1949, Betty married Robert (Bob) Emil Stuhr in Silver Creek, Nebraska. The couple made their home on a farm near Shelby, Iowa. While Bob served in the Naval Reserves during the Korean Conflict, they lived in Memphis, Tennessee, and Miramar, California. After Bob’s discharge, they returned to the farm, and Betty served as the Shelby-Tennant school nurse for 23 years, as well as working part-time at the Baptist Home in Harlan, Iowa, for five years.

Betty was preceded in death by her parents; her husband, Robert, on August 10, 2015; and one brother, Donald Jacobsen. She is survived by three daughters, Linda (Dix) Scranton of Norfolk, Nebraska, Merry Jo Stuhr of Gray, Maine, and Nancy (Don) Foringer of Overland Park, Kansas; one son, Richard (Kae) Stuhr of Shelby, Iowa; two sisters, Dorothy Adkinson of Central City, Nebraska, and Joann Hauptmann of Neligh, Nebraska; a number of grandchildren, step-grandchildren, and step-great-grandchildren; and other relatives and friends.

Services will be held at a later date. Memorials may be made to the Shelby Volunteer Fire Department, Shelby, Iowa, and the Avoca Public Library, Avoca, Iowa. The Burmeister-Johannsen Funeral Home in Shelby, Iowa, was in charge of the arrangements. Condolences may be left online at www.burmeisterjohannsen.com.