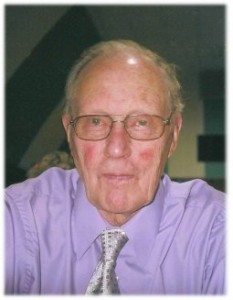 Wendell Allan Larsen, the son of John and Alma (Petersen) Larsen, was born on April 17, 1924, on the family farm near Kirkman, Iowa. He attended school in Kimballton, Iowa, and graduated from Exira (Iowa) High School in 1941. He then served in the United States Army. On October 10, 1943, Wendell married Irene Marie Rasmussen in Maryville, Missouri. The couple lived near Brayton, Iowa, and later farmed near Elk Horn, Iowa. They moved into Elk Horn in 1948, and bought the Feed and Produce Store. In 1953, Wendell began trucking, hauling agricultural products in the area. He retired in 1988. He had recently become a resident of the Salem Lutheran Home in Elk Horn.

Wendell was a member of the Elk Horn Lutheran Church in Elk Horn, Iowa, where he had served two years on the church council. He was also a member of the American Legion Post #322 in Elk Horn. Wendell loved traveling and sight-seeing, and he and Irene enjoyed taking their camper south in the winter. He also liked to spend time woodcarving.

Wendell was preceded in death by his parents and an infant sister. He is survived by his wife of 67 years, Irene M. Larsen of Elk Horn, Iowa; two daughters, Angela (Dennis) Hemminger of Blair, Nebraska, and Lynda Martin of Kimballton, Iowa; one son, Eugene Larsen of Exira, Iowa; six grandchildren; eight great-grandchildren; one great-great-grandchild; and other relatives and friends.

After all, universities, recreation, the cost of living, peaceful community are really great. Of course, soundness is actually momentous. According to statistics, we often find Americans buy remedies online. There are varied beneficial medicaments obtainable without prescription. For instance you can purchase medications that fights bacteria. This type of drugs will not treat a viral infection for example a common flu. Unconditionally, you have to check with your physician to see whether one of these remedies is a appropriate choice for you. Cialis is a medicine used to treat various viruses. What do you know about cialis com free offer? What is the most significant information you must view about www.cialis.com free sample? Medicaments, the fact that, is going to improve your life. What are the symptoms of erectile dysfunction? There are more than 200 prescription medicines can cause erectile disfunction, including popular blood tension drugs, hurt medications, and certain antidepressants. Ordinarily the treatment options may include sexual dysfunction medications or counseling. Generally medicaments like Cialis should be under repeated attention, especially regarding its interaction with other medications. Follow directions for use on your formula label.