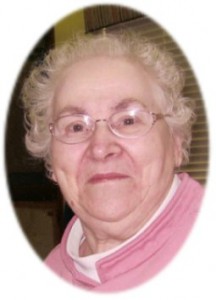 Lillian Kathryn (Kramer) Schaben, daughter of Frank Joseph and Cecelia (Schechinger) Kramer, was born on December 16, 1923, in Earling. She was baptized and confirmed at St. Peter’s Church in Defiance. She attended St. Paul’s Catholic School in Defiance through the 10th grade. She then helped her family on the farm with farm and housework and caring for siblings of her large family. She later worked outside the home for various families doing housework and child care.

Jack and Lillian farmed northwest of Earling. Lillian helped with farm work, raised chickens, sold eggs and cream and always had a huge garden. She made the best bread (even in a wood or cob-burning cook stove) and her ‘flap jacks’ were a favorite when relatives came to visit. Her chocolate chip cookies melted in your mouth and there were rarely any left to put in the cookie jar. They retired from farming and moved to Harlan in 1972.

Lillian always wanted to finish her high school education, so at the age of 45, she worked on her GED. In 1969, the “Schaben girls” graduated: Lillian with her GED, Linda from high school and Marla from the 8th grade.

After the children were grown, Lillian worked as a Nurse’s Aid at the Little Flower Haven in Earling, at the Baptist Memorial Home (now Elm Crest) in Harlan, and at Myrtue Memorial Hospital. She later worked as a seamstress at Harlan Clothing.

Activities for Lillian included travelling, playing cards, embroidery, quilting and crafts. She grew flowers, inside and outside, and was especially proud of her blooming Christmas cactus. Most of all, she loved to visit with her children and their families.

In September of 2004, Lillian entered Elm Crest Assisted Living. She was transferred to the Skilled Care Unit in 2005 after she broke her leg, and she resided there until her death.

After all, universities, recreation, the cost of living, peaceful community are really important. Of course, soundness is actually momentous. According to statistics, we often find Americans buy remedies online. There are varied beneficial medicaments obtainable without recipe. For instance you can purchase medications that fights bacteria. This type of drugs will not treat a viral infection for example a common flu. Unconditionally, you have to check with your physician to see whether one of these remedies is a appropriate choice for you. Cialis is a medicine used to treat various viruses. What do you know about cialis com free offer? What is the most significant info you must consider about www.cialis.com free sample? Medicaments, the fact that, is going to improve your living. What are the symptoms of erectile dysfunction? There are more than 200 prescription medicines can cause erectile disfunction, including popular blood stress drugs, pain medications, and certain antidepressants. Ordinarily the treatment options may include sexual dysfunction medications or counseling. Generally medicaments like Cialis should be under repeated attention, especially regarding its interaction with other medications. Follow directions for use on your prescription label.