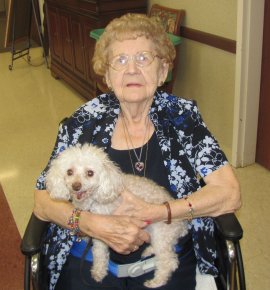 Sadie Irene Zimmerman, the daughter of Albert W. and Mary M. (Bogs) Rock, was born on July 31, 1923, three miles south of Shelby, Iowa. She attended Walnut Grove #4 country school through the eighth grade, and then worked as a hired girl for new mothers. On July 31, 1941, Sadie married Ralph William Zimmerman in Papillion, Nebraska.

Sadie sold Avon, Stanley products, and Playhouse Toys from 1958-1962. In 1972, she became a bookkeeper for Fullerton Lumber in Avoca and Shelby; she continued in this position until 1982. Ralph died on November 29, 1989, in Council Bluffs, Iowa. In 1990, Sadie returned to selling Avon.

Sadie had been a member of the First Presbyterian Church in Shelby, Iowa, since 1950. She had served as church treasurer for 13 years, a Sunday School teacher and superintendent, and was a member of the ladies group. On March 2, 1988, Sadie was honored to be recommended for the Degree of Chivalry of Rebekah Lodge #140, Shelby, Iowa. She enjoyed collecting matchbooks, owls, pens and pencils, and buttons. Sadie also like to make hand-tied quilts. She and Ralph enjoyed traveling on three Golden Sun feed trips, to Hawaii, Las Vegas, and the Bahamas. Sadie especially loved her toy poodle, Skeeter, who survives her.

Sadie I. Zimmerman died on Thursday, August 4, 2011, at the Myrtue Medical Center in Harlan, Iowa, having reached the age of 88 years and 4 days.

Sadie was preceded in death by her parents; her husband, Ralph William Zimmerman; three brothers, LaVerne Rock, Gerald Rock, and Harry Rock; one sister, Betty Alpen; one daughter, Thelma Sindt; and one son, Delmon Zimmerman. She is survived by two daughters. Diane (Jody) Oles of Round Lake Beach, Illinois, and Peggy (Dennis) Slagle of Dunlap, Iowa; one sister, Esther Messerschmidt of Neola, Iowa; 11 grandchildren; 22 great-grandchildren; three great-great-grandchildren; and other relatives and friends.