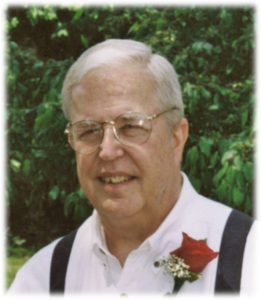 Gary Wayne Jorgensen passed away at his home on Tuesday December 24, 2019 after a twenty-two year struggle with Parkinson’s Disease. Gary was born to Harry Jorgensen and Melba (Tague) Jorgensen in Carroll, Iowa on April 14, 1941.

Gary spent his childhood in Fiscus, Iowa, playing with cousins and neighborhood children. His father Harry and Uncle Elmer owned Jorgensen Brothers Trucking Company, one of the first trucking firms in southwest Iowa. On August 17, 1946, when Gary was five, his father, Harry, died unexpectedly of a massive heart attack. Gary and his mother moved to Harlan to live with his grandparents, Hoyt and Doris Tague.

His Grandma Tague helped Gary adopt and raise pets including parakeets, robins, mice, chickens, a dog, a horse, and even a pet squirrel, named DG, which he carried around in his shirt pocket.

Gary’s Grandpa Tague took Gary along to his farm where he learned to do repairs and care for the animals.

Gary was baptized by immersion as a young teen at the Harlan Church of Christ. He was a faithful member and a leader in the congregation. He taught Bible classes, preached sermons and lead singing, which was his favorite. He served as elder from the mid 1980’s to 2015.

Gary attended Harlan High School where he played football, basketball, ran track and was on the first wrestling team. He performed pantomimes, was in plays and acted in skits during half times at basketball games. He sang in HHS chorus and also sang in chorus for small groups. He graduated with the class of 1960.

He attended Harding College in Arkansas in 1960-61. He then enrolled at Palmer Chiropractic College, Davenport, Iowa and graduated in 1964. He began a chiropractic practice in 1967 and served hundreds of patients over a forty-year period. He was known affectionately as “Doc” and counted many of his patients as friends.

Gary and Camelia once owned a funeral home and had rental properties in the area. They purchased a farm east of Harlan on top of Rabbit Hollow Hill in 1991 and moved there in 2006.

Gary and Camelia were known for their hospitality from family gatherings to neighborhood parties, from church get-togethers to reunions. Gary was a collector. His collections included antique cut glass, fine china, guns, furniture, cars and old farm machinery. He loved local history, tales from past days and stories of his family. His wonderful sense of humor, his love of all things social and extraordinary memory made him a delight to be around.

Dr. Gary is survived by his wife of fifty-six years, Camelia Olsen. They were married June 2, 1963, in Exira, Iowa, at the bride’s home.

He will also be missed by their three children and ten grandchildren. Included are son Richard from Audubon and his son Ethan and Ethan’s mother Ann Mellinger from Harlan. Their daughter Rachelle (Todd) Sorensen and their children, Annika, Christian, Asta, Camela and Hoyt all from Brentwood, Tennessee. A daughter, Christina (David) McIllwain and their children Tague, Sophia, Estee and H all from Hendersonville, Tennessee.

In many ways, Gary Jorgensen lived his life and urged others to do the same, based on the words in 2 Peter 3:13-14. “In keeping with his promise we are looking forward to a new heaven and a new earth, the home of righteousness. So then, dear friends, since you are looking forward to this, make every effort to be found spotless, blameless and at peace with Him.”

Gary was a diligent man who sought peace among all people, who aimed to live a spotless life, and who did all he could to be blameless in the eyes of all. Now he rests in heaven among the righteous.