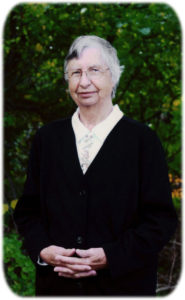 Elsie Elizabeth Phifer, the daughter of Herman Herbert and Sophia Maria Helena (Suhr) Abrahams, was born on February 22, 1935, in Utica, Nebraska. She was raised in the Utica, Seward, and Fremont, Nebraska, areas, where she farmed with her father and babysat. Following her graduation from the eighth grade, Elsie became a fulltime nanny. She later began working at the Robinson Seed Corn Company in Waterloo, Nebraska. It was there Elsie met Charles Edward Phifer, Jr., and they married on March 24, 1956, at St. Paul’s Lutheran Church in Blair, Nebraska.

Elsie and Charles moved to Parks Air Force Base in Dublin, California, where she nannied, ironed uniforms, and baked bread for servicemen and their families. They moved to Fremont, and Elsie worked at Head Start as an Aide and Parent Coordinator. She became a stay-at-home mother and daycare provider. In 1995, the couple moved to Harlan, Iowa, and Elsie was employed by West Central Community Action, DHS, and the Senior Center until her retirement in 2016.

Elsie was a lifelong Lutheran. A longtime daycare and Foster Care provider, she loved caring for others. Elsie was involved with the Association for Retarded Citizens (ARC), was co-founder of the Pilot Parent Program, and was a PTA member. She enjoyed gardening, and had beautiful flower beds. Elsie also liked to can and bake, and often shared baked goods with many in her neighborhood.

The funeral service was held on Saturday, December 28, 2019, at Bethlehem Lutheran Church in Jacksonville, Iowa, with Pastor Keith Menter of Elk Horn Lutheran Church, Elk Horn, Iowa, officiating. Peggy Doonan and Pastor Menter were the service musicians. Elsie’s loving family served as casket bearers. Burial was in the Harlan Cemetery, Harlan, Iowa. The Burmeister-Johannsen Funeral Home in Harlan, Iowa, was in charge of the arrangements. Condolences may be left online at www.burmeisterjohannsen.com.