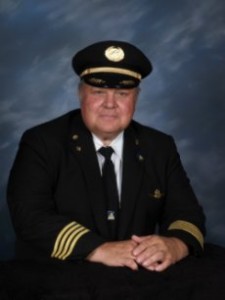 Gail Wilfred Schwarte, the son of Henry Rudolph and Ella Marie (Frank) Schwarte, was born on April 4, 1949, west of Earling, Iowa. He was baptized and confirmed at St. Joseph Catholic Church in Earling, and attended St. Joseph Catholic School; he graduated in 1967. Following graduation, Gail attended one year of trade school at Universal Trade in Omaha, Nebraska, where he studied Auto Mechanics.

Gail was drafted into the U.S. Army, and he served nine months in Vietnam. After his discharge, he worked at Wilwerding Auto Craft. He later purchased the business and called it Schwarte Auto Craft, which he operated until 2004. Gail and Kelly opened S & S Car Wash in Earling in 2007.

In 1975, Gail earned his pilot’s license, and at one time owned his own airplane. He later flew for several small carriers. In 1987, he began flying for Northwest Airlines, and was currently flying for Delta Airlines. Throughout his career, Gail had worked to attain the rank of captain, and he flew several models and sizes of aircraft. He had recently flown to Mexico, Canada, and the Caribbean.

Gail was a member of St. Joseph Catholic Church in Earling, Iowa. He was a Third Degree Knight of Columbus Council #1741. Gail’s life changed when his grandchildren were born, and they became the center of his life. They called him “AMPA”, and he was the greatest grandpa ever. A common man of many interests and projects, he enjoyed carpentry, building, auto body painting, and was a skilled welder. Gail liked working on classic cars and antique International Farmall tractors and riding his motorcycle.

Mass of Christian Burial was held on Tuesday, November 8, 2011, at St. Joseph Catholic Church in Earling, Iowa, with Father Chris Fontanini and Father Larry Hoffmann celebrating. Mary Wilwerding and Tyler Gubbels were the musicians. Serving as casket bearers were Jim Gaul, Phil Blum, Melvin Bruck, Allen Bruck, Steve Havens, and Gerald Kohles. Burial was in the St. Joseph Catholic Cemetery in Earling, Iowa, with military rites by the American Legion Post #615. The Burmeister-Johannsen Funeral Home in Harlan was in charge of the arrangements. Condolences may be left online at www.burmeisterjohannsen.com.