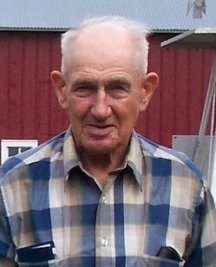 Robert Spencer Kroman, the son of Andrew and Christina (Christensen) Kroman, was born on February 22, 1919, in Elk Horn, Iowa. He was baptized and confirmed at the Elk Horn Lutheran Church. Robert attended Elk Horn schools and graduated from Elk Horn High School in 1937. He spent his entire life farming, and purchased his mother’s family farm in 1969; he retired from farming in 2000.

Robert was a member of the Elk Horn Lutheran Church in Elk Horn, Iowa. He loved doing farm work and enjoyed his tricolor collie dogs. Robert also enjoyed traveling out west with his best friend and constant companion, Arlene Hansen.

A memorial service was held on Thursday, December 8, 2011, at Burmeister-Johannsen Funeral Home in Harlan, Iowa, with Pastor Keith Menter of the Elk Horn Lutheran Church, Elk Horn, Iowa, offiating. Marge Ahrenholtz was the organist, and Diane Kastens served as soloist. Robert Christensen was the urn bearer. Burial of ashes was in the Elk Horn Lutheran Cemetery in Elk Horn, Iowa. The Burmeister-Johannsen Funeral Home in Harlan was in charge of the arrangements. Condolences may be left online at www.burmeisterjohannsen.com.