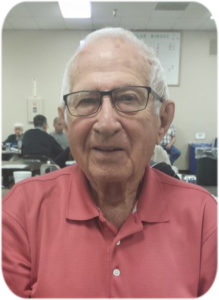 THERE IS NO VISITATION

Gail Earle Schnack, the son of Earle Otto and Lucille Idealia (Burgin) Schnack, was born on September 17, 1935, in rural Harlan, Iowa. He attended Harlan schools and graduated from Harlan High School in 1954. Gail married LeAnn Schimmele in 1954, and the couple became the parents of three children. For eleven years, he was half-owner of Jake and Gail Service Station in Harlan. In 1965, Gail began working as an outside sales representative for United Electric Supply in Omaha. Nebraska. He held this position until his retirement on August 1, 2013.

On June 4, 1988, following his divorce from LeAnn, Gail married Marilyn Jean Anstey in Harlan. Gail and Marilyn enjoyed spending many winters in Mesa, Arizona. Marilyn died on January 8, 2015, in Mesa. Gail then married Virginia Mae Jensen on June 13, 2015; she preceded him in death on February 9, 2018, in Harlan.

Gail was a member of Immanuel Lutheran Church in Harlan, and was a former member and president of the Harlan Lions Club. He had been a member of the Harlan Golf and Country Club since 1965. Gail liked to spend time golfing, doing yard work, and playing bingo.

Gail E. Schnack died on Thursday, October 3, 2019, at Myrtue Medical Center in Harlan, Iowa. He had reached the age of 84 years and 16 days.

Gail was preceded in death by his parents; three wives, LeAnn, Marilyn, and Virginia; one brother, Craig Schnack; and one step-daughter-in-law, Pamela Anstey. He is survived by two daughters, Kathleen Stanton of Des Moines, Iowa, and Dr. Sherrie Schnack of Minneapolis, Minnesota; one son, David Schnack of Minneapolis, Minnesota; one brother, Gordon (Irene) Schnack of Omaha, Nebraska; two stepsons, Todd Anstey and Curt Anstey, both of Plattsmouth, Nebraska; his best friend, Bonnie Grabill of Harlan, Iowa; eight grandchildren; seven great-grandchildren; and other relatives and friends.

A memorial service was held on Sunday, October 13, 2019, at Immanuel Lutheran Church, Harlan, Iowa, with Pastor Phillip Nielsen officiating. Heidi Thies served as the musician. Burial of ashes was in the Harlan Cemetery, Harlan, Iowa. Memorials may be directed to the American Diabetes Association at https://www.diabetes.org/donate. Burmeister-Johannsen Funeral Home in Harlan, Iowa, was in charge of the arrangements. Condolences may be left online at www.burmeisterjohannsen.com.