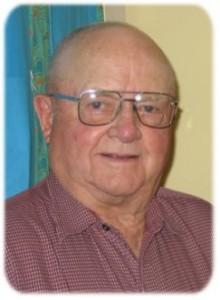 Delmer Lynn “Curly” Petersen, son of August Friedrick and Marie Magdalena (Jebsen) Petersen, was born on May 29, 1926, southwest of Avoca, Iowa. He attended Pleasant #8 country school and graduated from Shelby High School in 1943. Following his service in the United States Army during World War II, Curly returned to Avoca and farmed with his father. On March 12, 1955, Curly married Myrna Lou Jacobsen at the Lutheran Church in Avoca. The couple farmed until their retirement in 1991; after retirement, they remained on the homestead.

Curly was a member of the Silver Creek United Methodist Church in rural Hancock, Iowa. In his youth, he enjoyed playing baseball. He loved farming, feeding cattle, and doing welding work for himself and many others. Curly also liked doing carpentry work, and took pride in building his own home and furniture.

Funeral services were held on Monday, December 19, 2011, at Burmeister-Johannsen Funeral Home in Harlan, Iowa, with Mr. Wayne Paulsen officiating. JoAnne Dea served as the organist, and the soloist was Bonnie Peters. Casket bearers were LeRoy Hansen, Rich Hansen, Rob Hansen, Frank Roane, Steve Welbourne, Russ Brandes, and Jan Flemming. Burial was in the Shelby Cemetery in Shelby, Iowa. The Burmeister-Johannsen Funeral Home in Harlan was in charge of the arrangements. Condolences may be left online at www.burmeisterjohannsen.com.