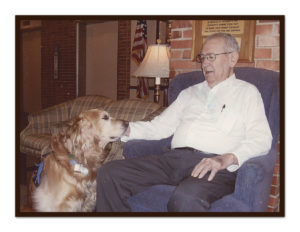 Marvin Lynn McCool, the son of Harry M. and Irene M. (Stevens) McCool, was born on August 30, 1927, in Tennant, Iowa. He grew up on the family farm, and helped with the usual farm chores. Marvin attended Tennant schools through the tenth grade. His family raised greyhounds for racing, and he was especially proud of his dog that won a race in Kansas.

On December 27, 1950, Marvin married Betty Jean Petersen at her parents’ home in Avoca, Iowa. Marvin began working for Brown Oil Company in Avoca, and then managed a gas station, also in Avoca. Betty and Marvin became the parents of a daughter, Linda. Betty succumbed to polio and died in 1952, in Council Bluffs, Iowa. Marvin married Elizabeth Mae Meckna on October 2, 1962, in Avoca, and together they became parents to their daughter, Mary. The family moved to Omaha, Nebraska, where Marvin began working in sales. After living in Omaha for several years, they moved to North Platte, Nebraska, where he became top salesman for Huskey Oil Company.

Following the closing of Huskey Oil, Marvin and his family returned to Iowa, settling in Atlantic. Marvin kept busy managing the Walnut Grove apartments for many years. After his retirement, Marvin became a resident of the Heritage House in Atlantic. Elizabeth died on October 15, 2014, in Atlantic.

Marvin L. McCool died on Tuesday, September 17, 2019, at the University of Nebraska Medical Center – Clarkson Hospital in Omaha, Nebraska. He had reached the age of 92 years and 18 days.

Preceding Marvin in death were his parents; his first wife, Betty; his second wife, Elizabeth; and two brothers, Malcolm McCool and Larry McCool. He is survived by two daughters, Linda (Rodney) Polacek of Shelby, Iowa, and Mary McCool of Atlantic, Iowa; one sister, Marjorie Meyers of Denison, Iowa; grandchildren, great-grandchildren, and great-great-grandchildren; and other relatives and friends.

The funeral service was held on Saturday, September 21, 2019, at Burmeister-Johannsen Funeral Home, Shelby, Iowa. Pastor Carol Fox of the First Assembly of God, Harlan, Iowa, led the service. Casket bearers were Joe Buck, Cody Buck, Lance Buck, Louie Ring II, Paul Polacek, and Anthony Wade. Burial of ashes will take place in the Layton Township Cemetery, Walnut, Iowa, at a later date. The Burmeister-Johannsen Funeral Home in Shelby, Iowa, was in charge of the arrangements. Condolences may be left online at www.burmeisterjohannsen.com.