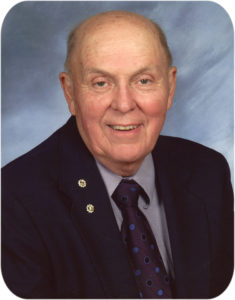 SERVICE DETAILS
Tuesday, May 14, 2019
11:00 AM
First United Methodist Church
Harlan, IA
(get directions)
Burial will be in the Neola Township Cemetery, Neola, IA

Courtney Merle Lawyer, the son of Courtney Hulbert and Leona Christine (Benjegerdes) Lawyer, was born on September 12, 1934, in Mason City, Iowa. He grew up on a farm located west of Manly, Worth County, Iowa. Merle went to Danville No. 6 country school through the fourth grade, and then attended Manly Public School, graduating from high school in 1952. He attended Iowa State College and graduated with a degree in Agronomy in 1956. Upon graduation, Merle received a commission in the United States Army as a Second Lieutenant, and served two years at Fort Sill, Oklahoma, and Fort Ord, California. He transferred to the US Army Reserves, and retired in 1983. Following active duty, Merle began a career as a Soil Conservationist with the U.S. Soil Conservation Service in LeMars, Anthon, and Harlan, Iowa. He retired in April 1994.

Merle married Marcella Katherine (Knapp) on July 30, 1961, in Le Mars, Iowa; this marriage ended in divorce. On January 9, 1981, he married Betty Lou (Trent) Cook. Betty died in 2006 after a long illness. Finally, Merle and Cleopha Krantz Garrison were married on July 11, 2009, at the First United Methodist Church in Harlan, Iowa.

Merle was a member of the First United Methodist Church in Harlan, Iowa. He also enjoyed membership in the Harlan and Harlan Golden Key Kiwanis Clubs, and served as president of both clubs. A member of the Eastern Star, Merle was also a 50-year Mason (Parian Masonic Lodge 321 AF&AM), and served as Master in Harlan for a year. He was also a member of the Shelby County Historical Society and had served on its board and as president of the board. Merle enjoyed family genealogy, history, and travel.

The funeral service was held on Tuesday, May 14, 2019, at the First United Methodist Church in Harlan, Iowa, with Pastor Mike Agnew officiating. John Rosman served as the musician. Casket bearers were Dan Garrison, Don Graeve, Dylan Garrison, Jeff Garrison, Charley Parkhurst, and Branden Lawyer. Burial was in the Neola Township Cemetery, Neola, Iowa. The Burmeister-Johannsen Funeral Home in Harlan, Iowa, was in charge of the arrangements. Condolences may be left online at www.burmeisterjohannsen.com.