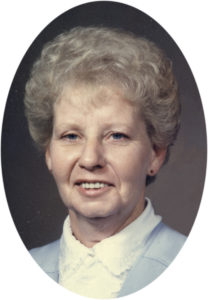 NO SERVICE IS PLANNED

Kay Claire Hupp, the daughter of William and Mary Margaret (Humphrey) Brocker, was born on November 13, 1938, in Omaha, Nebraska. She graduated from Technical High School in 1956, and then married Anthony Tomasella in Omaha; the couple had five children. She later  married Ray England, also in Omaha.

On March 31, 1989, Kay married Lowell J. Hupp in Harlan, Iowa; it is there they made their home. Kay was employed as the Office Manager at Nishna Bend Conservation Office until her retirement on December 12, 2005.

Kay and Lowell enjoyed traveling, and had visited Arizona, Colorado, Georgia, and Las Vegas, Nevada. They especially enjoyed going to Branson, Missouri, to attend various music shows. A good cook and loving mother, she will be deeply missed by her family, as well as her toy poodle and beloved pet of 17 years, Brandie.

Kay was preceded in death by her parents and one granddaughter. She is survived by her husband, Lowell Hupp of Harlan, Iowa; five children; five step-children; one sister, Mary Crosby of Coventry, Vermont; six grandchildren; nine great-grandchildren; and other relatives and friends.