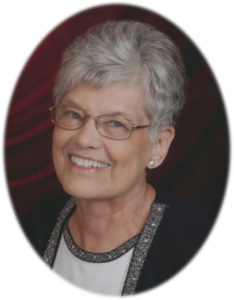 Karan Kay Brockmann, the daughter of Lorenz and Harriet (Tucker) Bertram, was born on May 26, 1940, in Ireton, Iowa. She attended Ireton schools, where she played basketball and was a member of the band. Following her high school graduation in 1958, Karan attended Westmar College in LeMars, Iowa, and earned her teaching certificate in 1960. On June 16, 1961, Karan married Richard Lee Brockmann in Ireton. The couple lived in a number of towns in northwest Iowa, where Karan taught first and second grades. In 1975, they moved to Shelby, Iowa, where Karan became the meal site coordinator for Shelby Seniors. She later worked for Pottawattamie County Health for many years.

Karan was a member of United Lutheran Church in Shelby, Iowa, and taught Sunday School and Bible school for many years. She was an organized woman who kept a neat home. Karan enjoyed spending time with and cooking for her family members. She also liked flower gardening, painting flowers, and reading.

Karan was preceded in death by her parents; two brothers, Allan “Bic” Bertram and Charles Bertram; and one sister, Jean Eilers. She is survived by her husband of 57 years, Richard Brockmann of Shelby, Iowa, one daughter, Joni (Matt) Mardesen of Monroe, Iowa; one son, Steve (Rhonda) Brockmann of Bellevue, Nebraska; three brothers, Larry Bertram of Lancaster, California, Jim (Gloria) Bertram of La Crosse, Wisconsin, and Tom (Dee) Bertram of Sioux City, Iowa; one sister, Joyce Rosenboom of Lexington, Kentucky; one sister-in-law, Jean Bertram of Ireton, Iowa; nine grandchildren; and other relatives and friends.

The funeral service was held on Thursday, February 21, 2019, at United Lutheran Church in Shelby, Iowa, with Pastor Heather Ploen officiating. Nancy Armstrong served as the organist, and Bonnie Peters was the soloist. Casket bearers were Jason Ploen, Mark Bertram, Doug Robinson, Dale Schroeder, Larry McKnabb, and Kent Brockmann. Burial was in the Shelby Cemetery, Shelby, Iowa. The Burmeister-Johannsen Funeral Home in Shelby, Iowa, was in charge of the arrangements. Condolences may be left online at www.burmeisterjohannsen.com.