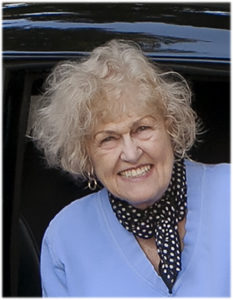 Sally Jo Burmeister, the daughter of Joseph Clyde and Agnes Christine (Anderson) Ashelford, was born on May 23, 1942, in Central City, Nebraska. She attended country school until 8th grade, where she was the only student in her class then graduated valedictorian from Central City High School in 1960. Sally completed nurse’s training at Immanuel Hospital, Omaha, Nebraska, and later received her BSRN degree from Bellevue University, Omaha.

On November 21, 1965, Sally married James Ray Burmeister in Central City. The couple made their home in Harlan, Iowa. Sally cofounded a nursing education program in Harlan before taking the Shelby County nurse position. Later, she worked for many years in the Shelby County Home Health Department of Myrtue Medical Center, as well as, serving on Shelby County Health and Country Care Facility boards. All the while, Sally maintained her family’s home and farm business accounting.

Sally was a member of Immanuel Lutheran Church in Harlan, Iowa. As a humble and gracious person, she truly loved her time with family and friends. Sally rarely missed her children’s or grandchildren’s activities. She and James enjoyed traveling with family and friends including many trips to Okoboji, Mexico, and even Turkey. Although Sally endured many years of poor health, she always had a smile on her face and a cheerful and encouraging word for others. She always put other’s needs before her own.

Sally J. Burmeister died on Thursday, February 14, 2019, at Select Specialty Hospital in Omaha, Nebraska. She had reached the age of 76 years, 8 months, and 22 days.

Sally was preceded in death by her parents, and only sibling, Frank Ashelford. She is survived by her husband of 53 years, James Burmeister of Harlan, Iowa; two sons, Jamie (Kelli) Burmeister of Omaha, Nebraska, and Jason (Stacey) Burmeister of Council Bluffs, Iowa; four grandchildren, Makenzie Burmeister, Jackson Burmeister, Samuel Burmeister, and Sydney Burmeister; and other relatives and great friends.

The memorial service was held on Saturday, February 23, 2019, at Immanuel Lutheran Church in Harlan, Iowa, with Pastor Phil Nielsen officiating. Marge Ahrenholtz served as the organist. Burial of ashes will be held at a later date in the Harlan Cemetery in Harlan, Iowa. The Burmeister-Johannsen Funeral Home in Harlan, Iowa, was in charge of the arrangements. Condolences may be left online at www.burmeisterjohannsen.com.