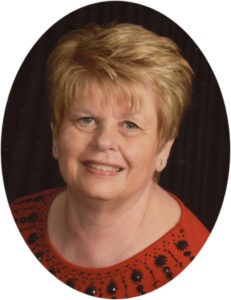 Nancy Lou Madsen, the daughter of Walter and Gladys (Stewart) Maassen, was born on February 17, 1950, in Atlantic, Iowa. She grew up southwest of Walnut, Iowa, and attended Walnut schools; she graduated with the Class of 1968. Nancy was active in the Rainbow Girls of the Masonic Lodge during her school years.

Following high school, Nancy studied cosmetology at Stewart’s School in Council Bluffs, Iowa. She began her career as a hairdresser in Atlantic, Iowa. On November 7, 1970, Nancy married Keith Dennis Madsen in Walnut. The couple made their home west of Elk Horn, Iowa, where she was active on the family farm. She opened her home-based shop, “Country Design”, in 1985, and ran the business until her retirement in 2016.

Nancy was a member of the Monroe Chapel, rural Walnut, Iowa. As a community-minded person, she volunteered with the Elk Horn Bloodmobile for 20 years. Nancy enjoyed quilting and sewing, and was a good cook. She liked to travel anywhere. Her first and only grandchild, Peyton, was precious to her.

Nancy L. Madsen died on Thursday, January 3, 2019, at Nebraska Methodist Hospital in Omaha, Nebraska. She had reached the age of 68 years, 10 months, and 17 days.