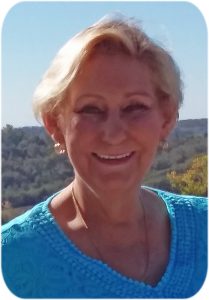 June Ella Schaben, the daughter of Anthony Joseph and Ella Mae (Zimmerman) Schaben, Jr., was born on December 4, 1955, in Harlan, Iowa. A good student, she attended Manilla, Iowa, schools, and graduated with the Class of 1974. June continued her education at Ottumwa Heights College, Ottumwa, Iowa, where she majored in English and minored in Fine Arts. At this point in her life, June began to struggle with mental illness, with which she bravely dealt for the rest of her life. She lived in Council Bluffs, Iowa, for many years before moving to Harlan in 1997.

June was a practicing Catholic who served her family in Christ by cleaning at St. Michael’s Catholic Church in Harlan. She was a kind-hearted individual who was blessed with many friends. As a strong, resilient, and resourceful woman, June was generous with what she had. She loved baking for family and friends, and enjoyed shopping at thrift stores and garage sales.

The Memorial Mass was held on Tuesday, June 26, 2018, at St. Peter’s Catholic Church, Defiance, Iowa, with Father Wayne Gubbels celebrating. EAnn Christiansen served as the musician. Burial of ashes was in the St. Peter’s Catholic Cemetery, Defiance, Iowa. The Burmeister-Johannsen Funeral Home in Harlan, Iowa, was in charge of the arrangements. Condolences may be left online at www.burmeisterjohannsen.com.