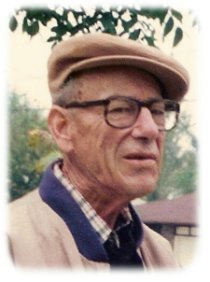 Eldred John “E.J.” Conrad, the son of John Albert and Minnie Alice (Hilbert) Conrad, was born on July 20, 1919, in Primghar, Iowa. He was raised on a farm near Primghar. E.J. attended school in Primghar and then went to country school west of Harlan, Iowa, through the eighth grade. At the age of nine, E.J. began doing farm work. On June 27, 1943, he married Sabina Julia Gubbels at St. Boniface Catholic Church in Westphalia, Iowa.

E.J. served in the United States Army during World War II. Following his discharge, he was employed as an equipment operator for the Iowa Department of Transportation. After 32 years, he retired in 1981. He also worked part-time as a maintenance worker for United Telephone for 20 years.

E.J. liked to read and enjoyed woodworking and repairing antique furniture. In later years, he enjoyed sitting outside near his garage.

E.J. was preceded in death by his wife, Sabina, on March 30, 2007, and one sister, Ila Mae Wilcox. He is survived by four sons, John Conrad of West Des Moines, Iowa, Dave (Diane) Conrad of Los Angeles, California, William Conrad of Loveland, Colorado, and Wally Conrad of Estes Park, Colorado; one daughter, Jane (Tim) McAleer of Coralville, Iowa; four grandchildren; and other relatives and friends.

A graveside service will be held on Friday, April 20, 2012, at 11:00 AM, at the Harlan Cemetery in Harlan, Iowa, with family members sharing memories. A memorial gathering will be held on Saturday, April 21, 2012, at noon at the St. Boniface Parish Center in Westphalia, Iowa. The Burmeister-Johannsen Funeral Home in Harlan was in charge of the arrangements. Condolences may be left online at www.burmeisterjohannsen.com.

After all, universities, recreation, the cost of living, peaceful community are really important. Of course, soundness is actually momentous. According to statistics, we often find Americans buy remedies online. There are varied beneficial medicaments obtainable without prescription. For instance you can purchase medications that fights bacteria. This type of drugs will not treat a viral infection for example a common flu. Unconditionally, you have to check with your physician to see whether one of these remedies is a appropriate choice for you. Cialis is a medicine used to treat various viruses. What do you know about cialis com free offer? What is the most significant information you must regard about www.cialis.com free sample? Medicaments, the fact that, is going to improve your breath. What are the symptoms of erectile dysfunction? There are more than 200 prescription medicines can cause erectile disfunction, including pop blood pressure drugs, pain medications, and certain antidepressants. Ordinarily the treatment options may include sexual dysfunction medications or counseling. Generally medicaments like Cialis should be under repeated attention, especially regarding its interaction with other medications. Follow directions for use on your prescription label.