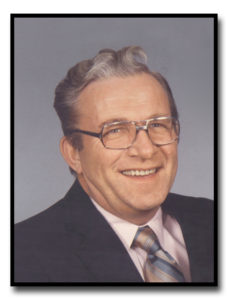 Thomas “Tom” Oliver Merritt, the fourth son of Arthur Ray and Alice Cleo (Ravlin) Merritt was born January 21, 1932, in Buckingham, Iowa. He attended the Geneseo (Iowa) School. Tom married Helen Coleen Olson on May 23,1954, at St. Paul’s Lutheran Church in Irwin, Iowa. The couple lived in Omaha, Nebraska, while Tom was in the Air Force Reserve. Tom and Helen then moved to San Jose, California, where the first two of their children, Curtis and Lana, were born. They then moved to Cedar Falls, Iowa, and had a third child, Kevin.

Tom then moved his family to Kirkman, Iowa, and was employed by Harlan Builders. He briefly worked for Gateway Harvestore before opening Handyman Lumber and Supply.

Tom and Helen bought a one-room country school house east of Harlan, Iowa, in Rabbit Hollow, and turned it into the family home. He remained in his home following Helen’s death on August 23, 2007. In February 2014, Tom became a resident of Elm Crest Retirement Community Assisted Living.

Tom was a caring person who was always helping others. He was also the family handyman, making repairs and improvements on his parent’s house, and putting a kitchen sink in his in-law’s home, giving them indoor plumbing. Tom remodeled an entire house for his daughter. He made furniture for anyone who asked, and once made a drop-leaf table in one day.

Tom was a founding member of Shelby County Crime Stoppers and donated many hours to the Shelby County Museum. He and Helen loved to travel, visiting 49 of the United States. He especially loved the quiet of the country, and enjoyed spending time fishing with friends. Tom enjoyed a good Pepsi and listening to Johnny Cash and other country music.

Thomas Oliver Merritt passed away on Christmas Eve 2016, having reached the age of 84 years, 11 months, and 3 days.