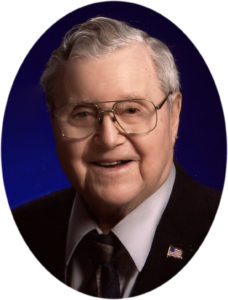 Edwin Franklin Larsen (Ed) was born August 30, 1920, on his parents’ (John F. Larsen and Lilly (Sornson) Larsen) farm in Oakfield Township, Audubon County, Iowa. He was their fifth child and only boy.

He attended country school #3 through eighth grade and then helped his father on the farm.

Ed was baptized as an adult at St. John’s Lutheran Church northwest of Adair, Iowa.

He worked for a time as a driver for H.P. Jorgensen Trucking.

In 1943, he married Ruby VanAernam and they had two daughters, Linda and Marcia. When his mother died, Ed and family moved back to the family farm where he helped his father farm and rented other land to farm. After his father died he bought the family farm.

In 1952, Ruby died and Ed was left to raise his two little girls alone. He was urged to place the girls in the Elim Children’s Home but he refused and struggled on with hired help to run the home as well as farming.

In the fall of 1953, Ed met Bev Peterson, a native of Fort Dodge, who also was raising two small children alone.

On May 19, 1954, Ed and Bev pooled their resources and blended their families, and married at the Elk Horn Lutheran Church. A fifth child, Rachel, completed the family.

In February 1980, they built a house and moved to Elk Horn with Ed commuting to the farm. Later they sold the farm to Al and Carol Petersen.

Ed learned to enjoy golf in his later years and having coffee with friends at the round table.

He was a longtime member of Elk Horn Lutheran Church and served twice on the church board. The last two years, Ed’s health began to fail and in November he was placed in Hospice care at their home, where he died on Tuesday, December 13, 2016, at the age of 96 years, 3 months, and 13 days.

He was preceded in death by his parents and four sisters, Erma Roberts, Ina Cunningham Sien, Myrtis Pedersen, and Ardyce Knudsen.

The memorial service was held on Wednesday, December 21, 2016, at the Elk Horn Lutheran Church in Elk Horn, Iowa, with Pastor Keith Menter officiating. Nancy Watson served as the organist, and Pastor Keith Menter was the soloist. The reader was Bill Rollins. Burial of ashes was in the Elk Horn Lutheran Cemetery, Elk Horn, Iowa. The Burmeister-Johannsen Funeral Home in Harlan, Iowa, was in charge of the arrangements. Condolences may be left online at www.burmeisterjohannsen.com.