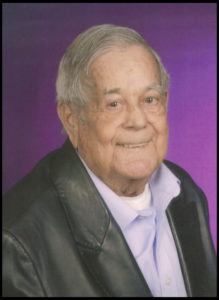 Eugene “Gene” Joseph Hahn, the son of William and Frances (Goeser) Hahn, was born on February 9, 1940, on his parent’s farm in Denison, Iowa. He attended Manilla (Iowa) Community School, and graduated in 1958. Gene joined the United States Army at the age of 20. Stationed in Germany, he served for two years. After his honorable discharge from military service, Gene worked in Omaha, Nebraska, at Cook’s Paint. It was at Crossroads where he met Eileen Kaufmann; the couple was married on September 4, 1965, at St. Boniface Catholic Church in Westphalia, Iowa.

The couple moved to Columbus, Nebraska, where Gene again worked at Cook’s Paint. Their next move took them to Genoa, Nebraska, where Gene owned the West Chicago Store, a country store located in the center of four different towns. They sold groceries, beverages, Cooper Feed, and Pioneer Seed Corn. After closing the store, Gene raised hogs. The couple finally moved to Manilla to be closer to family and to farm. Gene also worked for Carnarvon Sand and Gravel in Denison. He eventually retired due to poor health.

Gene was a member of Sacred Heart Catholic Church in Manilla. He had served as a member of the Manilla School Board for three years. Gene was an avid Nebraska Husker fan – “Go Big Red”!

Gene J. Hahn died on Sunday, December 4, 2016, at the Crawford County Memorial Hospital in Denison, Iowa. He had reached the age of 76 years, 9 months, and 25 days.

Gene was preceded in death by his parents, and one sister, MaDonna Hahn, at birth. He is survived by his wife of 51 years, Eileen Hahn of Manilla, Iowa; three daughters, Elaine (John) Blickenstaff and grandson, Jay, of Omaha, Nebraska, Shirley (Greg) Jirik and granddaughters, Madelyn and Lilly Beth, of Loveland, Colorado, and Julie (Scott) Hendrickson and grandsons, Lance and Jaden, of Colorado Springs, Colorado; one son, Jeff (Kristy) Hahn and granddaughters, Emma and Anna, of Chilton, Wisconsin; four sisters, Bea Akers of Plattsmouth, Nebraska, Alice (Gary) Hayes of Prescott, Arizona, Agnes (Marvin) Shackelton of Reno, Nevada, and Betty Ann (Joe) Wageman of Harlan, Iowa; one brother, David (Irene) Hahn of San Tan Valley, Arizona; and other relatives and friends.