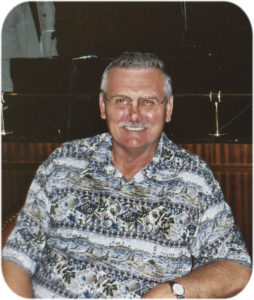 Dick attended school in Shelby and graduated with the class of 1958. While there, he participated in all sports and was a member of the basketball teams going to state in 1956 and 1957.

After high school, he enlisted in the United States Army and served for three years and three months. He received the honor of being Soldier of the Month and was discharged in March of 1962.

On January 27, 1963, Dick married Carol Joan Armstrong at the Congregational Church in Fontanelle, Iowa. They lived in Omaha, Nebraska, for a short time before moving to Shelby where Dick helped with his family’s farm and trucking business. Later he took over the farming, along with various ag-related jobs. He worked for Farm Service Cooperative for ten years before retiring in July 2002.

Dick was a member of the First Presbyterian Church in Shelby, and had served on the Church Council. He also had been a volunteer fireman for the Shelby Fire Department for twenty years.

Dick enjoyed traveling and had been to each of the states, Canada, Mexico, the Panama Canal, and the western Caribbean. He also liked watching Nascar, college basketball and football, and going for morning coffee at the Cornstalk on I-80. Most of all, he enjoyed watching the grandchildren in their activities, whether it be dance recitals or football games.

Dick was preceded in death by his parents; one sister-in-law, Dorothy Mattox; one niece, Patti Whitmore; one nephew, Ashley Mattox; and one son-in-law, Mark Tennigkeit. He is survived by his wife of 53 years, Carol Mattox of Shelby, Iowa; one daughter, Laura Tennigkeit of Underwood, Iowa; one son, Michael (Shelly) Mattox of Brooklyn Park, Minnesota; one brother, Marland Mattox of Omaha, Nebraska; one sister, Marlene (Glen) Hipnar of Shelby, Iowa; five grandchildren, Mason Tennigkeit, Austin Tennigkeit, Paige Tennigkeit, Kurt Mattox, and Kaitlyn Mattox; nieces and nephews; and other relatives and friends.