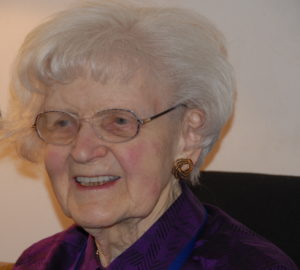 Ermelin Lenora Fallgatter, the daughter of Alfred and Karen (Pedersen) Simonsen, was born April 8, 1922, in Kimballton, Iowa. She graduated from Elk Horn High School in 1939.

After Robert’s ordination as a Lutheran pastor in 1954, Ermelin did volunteer work, played the organ and participated in the Lutheran Church Women’s group in the parishes where her husband served as pastor including the communities of Wilbur, Washington; Marlette and Brown City, Michigan; and Dunlap, Iowa. She, along with her husband, produced the convention minutes for the 1954 Danish Evangelical Lutheran Church Synod Convention at Bethlehem Lutheran Church, Cedar Falls, Iowa, and for many ensuing conventions.

Ermelin was a member of Immanuel Lutheran Church in Kimballton. In later years, Ermelin and Robert enjoyed providing the Danish open-faced sandwiches and the fellowship of the residents of the Salem Lutheran Home, Elk Horn, Iowa, on many Sunday afternoons.

Ermelin was preceded in death by her parents and her husband. She is survived by two daughters, Juleann Fallgatter (Dan MacMillan) of Washington, DC, and Michelle (Hisham) Elkhatib of Ames, Iowa; one son, Spencer (Lilia) Fallgatter of Chandler, Arizona; seven grandchildren, Kyle MacMillan, Alexandra and Kristian Fallgatter, Mazen (Lama), Rami, Samer, and Sara Elkhatib; one great-grandchild, Adam Elkhatib; and other relatives and friends.

The funeral service was held on Saturday, November 5, 2016, at Immanuel Lutheran Church in Kimballton, Iowa, with Pastor Sam Jacobs officiating. Shirley Pattee served as the organist. Casket bearers were Dan MacMillan, Rami Elkhatib, Samer Elkhatib, Kyle MacMillan, Hisham Elkhatib, and Kristian Fallgatter. Burial was in the Immanuel Lutheran Cemetery, Kimballton, Iowa. Memorials may be made to the Museum of Danish America, Elk Horn, Iowa. The Burmeister-Johannsen Funeral Home in Harlan, Iowa, was in charge of the arrangements. Condolences may be left online at www.burmeisterjohannsen.com.