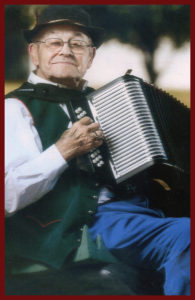 Charles “Charlie” Raymond Gearhart, son of Ellis Raymond and Bonnie Blanche (Kemp) Gearhart, was born on June 23, 1925, in Harlan, Iowa. He was baptized and confirmed at Immanuel Lutheran Church, Kimballton, Iowa. Charles attended Center Township No. 4 country school and graduated from Harlan High School. Following graduation, Charles was very honored to serve in the United States Army from March 6, 1945 – November 28, 1946, and earned the rank of Corporal. He then served in the Army Reserves for six years as a Platoon Sergeant.

After farming for a short time, Charles drove the Standard Oil truck for 16 years. He then worked at Agriland FS until 2000. Charles loved kids and greatly enjoyed driving a school bus for 30 years. In 2010, following Esther’s death, Charles moved to Elm Crest Retirement Community’s Assisted Living. He was an active participant in Elm Crest’s activities and was a catalyst in getting a paid chaplain on staff there.

Charles was a member of Immanuel Lutheran Church in Harlan, where he sang in the choir for 35 years and served on the Church Council. He was also a member of the Helmer-Reyelt American Legion Post #150 and the VFW Post #941. Charles loved music and had served as a Harlan Band Parents board member. He often played his accordion for church groups and his fellow Elm Crest residents. Family was very important to him, and get-togethers, Christmas, and birthdays were special. Charles liked to play cards with friends, and was a member of the Pinochle Card Club for 35 years. Charles was known for sending greeting cards for various occasions, especially Christmas.

The funeral service was held on Friday, October 21, 2016, at Immanuel Lutheran Church in Harlan, Iowa, with Pastor Phillip Nielsen officiating. Marge Ahrenholtz served as the organist, and Diane Kastens was the soloist. Casket bearers were Tim Ternus, Matt Moreno, Todd Arkfeld, Craig Arkfeld, Alan Poehlman, and Andrew Poehlman. Burial was in the Harlan Cemetery, Harlan, Iowa, with military rites provided by the Helmer-Reyelt American Legion Post #150 and the VFW Post #941. The Burmeister-Johannsen Funeral Home in Harlan, Iowa, was in charge of the arrangements. Condolences may be left online at www.burmeisterjohannsen.com.