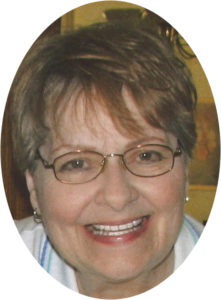 CELEBRATION GATHERING
Wednesday, October 5, 2016
3:00-7:00 PM
Burmeister-Johannsen Funeral Home
Harlan, IA
(get directions)
The family will be present to greet friends from 5:00-7:00 PM at the Funeral Home.

MASS OF CHRISTIAN BURIAL
Thursday, October 6, 2016
11:00 AM
St. Michael’s Catholic Church
Harlan, IA
(get directions)
Private burial of ashes will be held at a later time.

Mary Clare Stolz Bowman, the daughter of Frank Joseph and Violet Merle (Ames) Stolz, was born on August 17, 1936, in Kirkman, Iowa. She attended Harlan (Iowa) schools, where she acted in plays such as “The Case of the Crushed Petunias”, and received top honors in music contests. Mary Clare graduated from Harlan High School in 1954, and remained connected with her classmates throughout the years. She was a talented vocalist, and as a teenager, was active in the St. Michael’s Catholic Church congregation, singing at weddings and funerals.

Shortly after graduating from high school, Mary Clare married. She had three children, and raised them as a single parent in Omaha, Nebraska, and the surrounding area. During her young adulthood, she, along with two instrumentalists, formed a musical group, and she enjoyed using her musical talents while performing with this group.

Mary Clare worked in the Omaha Symphony office, and then later was employed as a rehabilitation counselor for Goodwill in Omaha. In 1988, she moved to Harlan to care for her aging parents. She then worked at CDS and Shelby County Monument.

Mary Clare was preceded in death by her parents; one brother, Charles Stolz; and one sister, Dolores Wohlhutter. She is survived by her three children, Cynthia (Greg) Bennet, Tony (Jane) Horning, and Tim Horning; two grandchildren; one great-grandchild; and other relatives and friends. Her children recognized and greatly appreciated her sacrifices for their benefit.

Mass of Christian Burial was held on Thursday, October 6, 2016, at St. Michael’s Catholic Church in Harlan, Iowa, with Father John Frost celebrating. John Rosman served as the musician. Private burial of ashes was in the Harlan Cemetery, Harlan, Iowa. The Burmeister-Johannsen Funeral Home in Harlan, Iowa, was in charge of the arrangements. Condolences may be left online at www.burmeisterjohannsen.com.