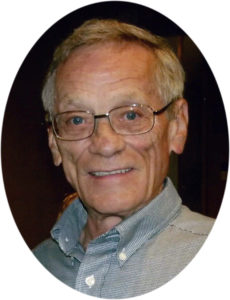 VISITATION DETAILS
Friday, October 7, 2016
2:00-7:00 PM
Burmeister-Johannsen Funeral Home
Harlan, IA
(get directions)
The family will be present to greet friends from 5:00-7:00 PM at the Funeral Home.

CELEBRATION OF LIFE SERVICE DETAILS
Saturday, October 8, 2016
11:00 AM
Rohde Funeral Home
Kingsley, IA
(get directions)
Burial of ashes will be in the Greenwood Cemetery, Pierson, IA

Gerald Lee “Jerry” Nairn was born on November 14, 1945, to Lloyd “Casey” and Viola (VanBuskirk) Nairn at Mrs. Murphy’s in Kingsley, Iowa. He joined a sister, Alice, and a brother, Ronnie. Jerry grew up in the Grand Meadow and Pierson, Iowa, areas where his father was a tenant farmer. He attended Grand Meadow School until the eighth grade, when the family moved to a farm near Pierson. Farm life was simple but hard work, and Jerry spent a lot of hours fishing farm creeks with his brother Ronnie. Being so many years younger than his siblings, Jerry was like an only child. He graduated from Kingsley-Pierson High School in 1963.

After graduation, Jerry attended Nettleton Business College in Sioux City, Iowa, graduating in January 1965. He worked at Grand Jewelers in Sioux City during his college years and after his graduation until enlisting in the Navy in September 1965. He attended Boot Camp in San Diego, California.

His first duty assignment was on the Destroyer USS Douglas H. Fox for eight months, with Norfolk, Virginia, as the home port. He also participated in six weeks of war exercises in Guantanamo, Cuba. After Communication Yeoman School in Norfolk, he went to the Communication Base in Barrigada, Guam, for 19 months. While there, he twice met Bob Hope, shaking hands with him. He was yeoman to officer in charge and assistant base Master At Arms.

Jerry volunteered for Vietnam and received orders to the YR-71, a repair barge in Da Nang, Vietnam, where he was a parts man and supply clerk for the engineering department. He returned to Long Beach, California, in March 1969, for separation.

Jerry was a bookkeeper for a jewelry store, worked at two finance companies, and then worked for more than 31 years at the Kraft candy factory in Kendallville, Indiana, doing maintenance. He retired from Kraft in 2005.

Jerry married Marjorie Walter in November 1973, and to this union two sons, Burton and Gary, were born. The couple later divorced. In Kendallville, Jerry was an active member and past Quartermaster of Francis E. Vineyard VFW Post 2749. He was a veteran’s advisor to the now defunct Families for Freedom Support group in Rome City, Indiana.

Jerry enjoyed working in their yard, watching and feeding birds, and fishing with Sally at Prairie Rose State Park. He loved nature, and during the winter months, they enjoyed driving out to the lake to “spot” deer. Jerry’s greatest joy was being grandpa to Brayden, for whom he was primary caregiver from infancy on. During their marriage, he and Sally enjoyed several trips. Locally, you could occasionally find them at an area casino. Jerry also loved attending all Harlan Cyclones home basketball games.

Jerry was a member of Immanuel Lutheran Church in Harlan, Iowa. He was a lifelong member of the Nash American Legion Post #140 of Kingsley.

A Memorial Prayer Service was held on Friday, October 7, 2016, at Burmeister-Johannsen Funeral Home in Harlan, Iowa, and the Memorial Celebration of Life service was held at Rohde Funeral Home in Kingsley, Iowa, on Saturday, October 8, 2016, with Pastor Phillip Nielsen of Immanuel Lutheran Church, Harlan, Iowa, officiating at both services. Elaine Todd served as the organist, and Brayden Michael Miller was the honorary urn bearer. Burial of ashes was in the Greenwood Cemetery in Pierson, Iowa, with military rites provided by Nash American Legion Post #140, Kingsley, Iowa. The Burmeister-Johannsen Funeral Home in Harlan, Iowa, was in charge of the arrangements, and was assisted by Rohde Funeral Home, Kingsley, Iowa. Condolences may be left online at www.burmeisterjohannsen.com.