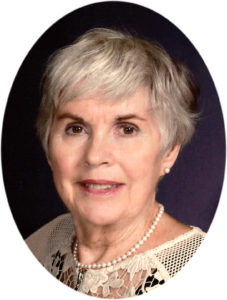 Janet Helen Davitt was born to Harry and Edrie (Callen) Phillips on August 5, 1941, in Centerville, Iowa, and grew up on a farm north of Centerville. Jan attended a one room country schoolhouse before graduating from Moravia (Iowa) High School in 1959. She graduated from AIB in Des Moines, Iowa, and worked for the Iowa Parole Board for several years.

Jan married Pat Davitt at St. John’s Basilica in Des Moines on August 25, 1962. They moved to Harlan, Iowa, where they were blessed to be the parents of four daughters. Her daughters and their families were a joy and support to her. She closely followed her nine grandchildren and their activities, attending innumerable events throughout the years. She was very proud of them all as they live their lives using their God-given gifts and talents to the best of their abilities.

Jan turned her love of travel into a successful business when she started Jan’s World Travel. Being a travel agent for 33 years gave her the opportunity to explore Central America, South America, Europe, Africa and Asia. She was energized by being around people and made friends wherever she went. Her PEO family was very special to her. She was a fabulous cook and was known especially for her pie crusts. She even won the Shelby County Apple Pie contest. Jan was an avid fan of Iowa football and enjoyed many years of tailgating at Homecoming games.

Her Catholic faith was important to her. She served on the St. Michael’s School Board and was a Eucharistic minister to those in the hospital, nursing homes and private homes. She was active in the Cursillo Renewal Retreats and used her Deacon Couple Formation contacts to counsel people seeking airline bereavement fares. After her own struggle with cancer, she was a leader in supporting other women by working with the Look Good Feel Better program. She was a friend to the Hispanic community, an advocate for the needy and an active volunteer for the Democratic Party, working for social justice.

Jan was preceded in death by her parents and her brother-in-law, Jerry Ziskind. She is forever in our hearts. Those keeping her memory alive include her husband of 53 years, Pat Davitt of Harlan, Iowa; her four daughters, Kim (John) Schmitz of Iowa City, Iowa, Lisa (Todd) Shaw of Ankeny, Iowa, Rachelle (Jeff) Goeser of Davenport, Iowa, and Theresa (Jim) Kranz of Harvard, Massachusetts; nine grandchildren, including Jacob and Aaron Schmitz, Ryan and Nicholas Shaw, Alyssa, Lauren, and Courtney Goeser, and Chloe and Lucas Kranz; one sister, Rosemary Ziskind of Falls Church, Virginia; and two brothers, Glen (Linda) Phillips of Raleigh, North Carolina, and Dave (Sharon) Phillips of Bettendorf, Iowa.