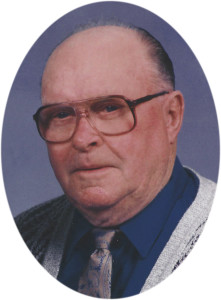 Gilbert Henry Hoogensen, son of Hans Hansen and Sena Christena (Behrens) Hoogensen, was born on June 25, 1919, in rural Jacksonville, Iowa. He attended school at Jackson #9 country school through the eighth grade and then worked as a hired man for area farmers. As a young man, Gilbert enjoyed playing men’s softball and baseball for the Jacksonville teams. On September 12, 1940, Gilbert married Arlene Margery Nissen at Bethlehem Lutheran Church in Jacksonville. Gilbert began farming with his father-in-law, Holger Nissen, just east of Jacksonville.

Gilbert worked as a rural mail carrier for the Postal Service for many years. He and Arlene also had an antique shop on the farm, and they enjoyed restoring antiques and greeting customers. In 1984, they retired to Harlan, Iowa. Gilbert remained in his Harlan home following Arlene’s death on June 9, 1999, until November 2014, when he became a resident of the Salem Lutheran Home in Elk Horn, Iowa.

Gilbert was a member of Bethlehem Lutheran Church in Jacksonville. His favorite pastime was brewing homemade beer.

Preceding Gilbert in death were his parents; his wife, Arlene Hoogensen; and one brother, Victor Hoogensen. He is survived by one daughter, Rita (Mike) Whiteley of Longmont, Colorado; and other relatives and friends.