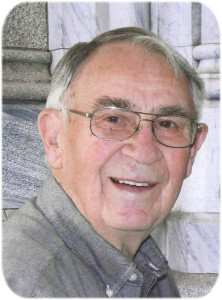 VISITATION DETAILS
Wednesday, April 6, 2016
2:00-8:00 PM
Burmeister-Johannsen Funeral Home
Harlan, IA
(get directions)
The family will be present to greet friends from 5:00-7:00 PM at the Funeral Home.

Richard Lee Andersen was born on September 10, 1933, in rural Jacksonville, Iowa, to Elmer H. and Florence Delilah (Smith) Andersen. He attended Kirkman (Iowa) school and graduated from Harlan (Iowa) High School in 1951. Richard played basketball and was a member of Future Farmers of America and 4-H. Richard enjoyed showing his livestock at the county fair. Richard began attending Bethel Baptist Church and accepted Christ as his Savior during his teen years.

After graduation, Richard started farming with his father, Elmer, near Kirkman. He worked hard raising and caring for cattle and learning the farming business. Fishing trips to Canada with friends were fun adventures. On June 1, 1953, he married Rosalie Larsen at the Bethel Baptist Church in Harlan. They settled in rural Harlan and welcomed their firstborn, Lori Lynn, on November 4, 1954. Shortly after Lori was born, Richard was drafted into the United States Army. Richard completed basic training in Arkansas in the spring of 1955 and was transferred to Fort Lee, Virginia, for Quartermaster training. By the end of the year, Richard was transferred again to Fort Ord, California, and the family followed. He worked as a PFC in a training company outfitting trainees and new recruits with proper gear and tools. He received his discharge in February 1957.

Following his discharge, Richard and his family returned to rural Kirkman to continue his farming career. While living there, two more girls joined the family, Keri Jane and Lisa Marie. In 1963, the family moved to a farm near Tenant, Iowa. In 1970, the family moved to a farm east of Harlan where the final member of the family was born, Gary Richard. Richard loved teaching his children how to help around the farm and raise animals. Richard also worked part time in town at the Farm Service Coop and for Alloway.

Richard took his family on numerous summer camping vacations that are remembered fondly. He served the Lord in his church as a Sunday school teacher and Deacon for many years.

After retirement, Richard and Rosalie moved to Harlan and Richard worked part time for Sorensen Equipment. The couple enjoyed attending their grandchildren’s activities and sporting events. Every June, they spent a special week in Clear Lake at family camp with their daughter, Lisa, and her family. Richard and Rosalie started their annual trips to Arizona by trailering a fifth wheel camper for an extended warm winter vacation. Over the years, their love for Arizona grew and their stays lengthened. Richard loved driving and navigating the long trip to Arizona, leaving in January and returning home in April. They made many new friends and enjoyed the many beauties of God’s creation in Arizona.

Richard was preceded in death by his parents. Those remaining to cherish his memory include his wife, Rosalie Andersen of Harlan; three daughters, Lori (Joe) Clancy, of Davenport, Iowa, Keri (Leo) Brooker of Jefferson, Iowa, and Lisa (Dwight) Osborn of Cedar Rapids, Iowa; one son, Gary (Kelley) Andersen of Blair, Nebraska; grandsons, Jeffrey Osborn of Iowa City, Iowa, Noah and Gilley Andersen of Blair, Nebraska; granddaughters, Erin (Greg) Westergaard and their sons, Brady and Beckett, of Polk City, Iowa, Emily (Joe) Davis and their son, Jorgen, of Omaha, Nebraska, and Molly Osborn of Cedar Rapids, Iowa; and many relatives and friends.

The funeral service was held on Thursday, April 7, 2016, at Bethel Baptist Church in Harlan, with Pastor Paul Reynolds, chaplain of the Salem Lutheran Home, Elk Horn, Iowa, officiating. Linda Post served as the organist, and Molly Osborn, Emily Davis, and Joe Lauterbach were the vocalists. Casket bearers were Joe Davis, Joe Clancy, Dwight Osborn, Leo Brooker, Greg Westergaard, and Jeffrey Osborn. Burial was in the Harlan Cemetery, Harlan, Iowa. In lieu of flowers, memorials may be made to the Museum of Danish America, Elk Horn, Iowa. The Burmeister-Johannsen Funeral Home in Harlan, Iowa, was in charge of the arrangements. Condolences may be left online at www.burmeisterjohannsen.com.