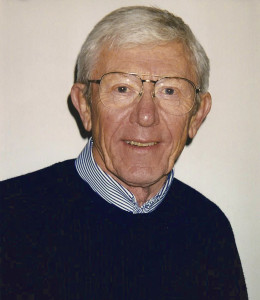 Willard Judine Olson, the youngest of seven children, was born to Elmer and Gornelia (Peterson) Olson on September 24, 1928, on the family farm near Thor, Iowa. He was baptized and confirmed at Badger Lutheran Church in Badger, Iowa. He attended country school in Webster County and graduated from Eagle Grove High School with the Class of 1946. While in school, Willard played football and baseball. He was active in 4-H and FFA and showed hogs at county fairs and the Iowa State Fair. After high school graduation Willard began farming in Webster County. On January 12, 1951, he was united in marriage to Margaret Ann Nelson at the Evangelical Lutheran Church in Eagle Grove, Iowa. In March of 1951, Willard enlisted in the United States Army. He was stationed in Heilbronn, Germany and was honorably discharged in March of 1953. Upon returning from the service Willard resumed farming with his wife Margaret on the “Home Place” near Thor. It was here their three children were born – daughters Rebecca Ann, Kristine Marie, and son Craig Willard. In 1958 the family moved to a farm near Moorland, Iowa. The family moved to Humboldt, Iowa in 1959 when Willard became a field-man for the Humboldt Livestock Auction Company. In November of 1962 the family moved to Harlan, Iowa where Willard was hired as the first hog buyer for Western Iowa Pork Company. In 1971 he joined Squealer Feed Company of Harlan, as a Territory Manager. He was in the feed industry the remainder of his working career and retired from feed sales with United Feeds in 1999.

Willard had a passion for livestock. He was in partnership with his son Craig and raised registered Landrace and Hampshire breeding stock. They exhibited breeding stock at many local, state, and national shows. Over the years he enjoyed judging many county, state and national hog shows. Willard was instrumental in starting the Shelby County Pork Producer Association.

He served his community as a 4-H leader, a Kiwanis member, and served on the Board of Directors of Midstates Bank. He was inducted into the Shelby County Fair Hall of Fame in 1999.

Willard was an active member of Immanuel Lutheran Church in Harlan where he served on several boards and committees, taught Sunday school, participated in Bible studies, and sang in the church choir. His faith was the foundation of his life. He was quick to give advice to his children, grandchildren and others – “Keep your priorities straight. Put God first and foremost, family second and career third.” Willard frequently reminded his children and grandchildren to be appreciative and thankful for all the blessings bestowed upon them.

Willard died at his home in Harlan on March 1, 2016, having attained the age of 87 years, 5 months, and 6 days. He was preceded in death by his parents and sisters Willetta O’Brion, Jodella Legvold, Elnor Nelson, and Harriett Schonberger. He is survived by his wife of sixty-five years Margaret Olson of Harlan, Iowa; daughters Rebecca (James) Chipman and Kristine Olson-Harmon, and son Craig (Judith) Olson all of Harlan; a sister Laurine Nelson of Minneapolis, Minnesota and brother Elmer (Shirley) Olson of Eagle Grove, Iowa. Additional survivors include grandchildren Eric (Hope) Chipman of Harlan, David (Kristi) Chipman of Big Rapids, Michigan, Anna Harmon of Des Moines, Jacob Harmon of Ames, Iowa, Sarah Olson (fiancé Bryan Lucke), and James Olson also of Ames; five great-grand sons Grant and Will Chipman of Harlan and Jonathan, Andrew, and Matthew Chipman of Big Rapids, Michigan; numerous nieces and nephews; other family members and friends.

May the memory of Willard Olson be a blessing to all those who knew and loved him.