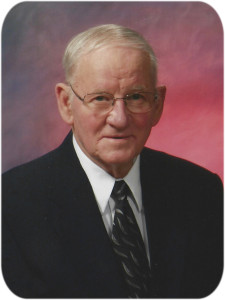 VISITATION DETAILS
Wednesday, February 10, 2016
1:00-8:00 PM
Burmeister-Johannsen Funeral Home
Harlan, IA
(get directions)
The family will be present to greet friends from 5:00-7:00 PM at the Funeral Home.

Lawrence Marvin “Rass” Rasmussen, the eldest son of Fredrick L. and Christine (Christiansen) Rasmussen, was born September 28, 1929, in Shelby County, Iowa. As a child, he attended rural school and graduated from Harlan (Iowa) High School in 1948. He attended Dana College for one year before serving in the United States Army during the Korean War. He was stationed at Fort Indiantown Gap, Pennsylvania, and Fort Knox, Kentucky, finishing his duty in Harrisburg, Pennsylvania.

On December 28, 1952, Lawrence was united in marriage to Doris Arlene Mathisen. After serving his time in the army, Lawrence and Doris returned to Atlantic, Iowa, where he worked for Pelgas for a year before moving to Harlan to start farming. Lawrence farmed west of Harlan for 43 years. He also worked at Dean’s Texaco station for a number of years where he enjoyed visiting with the many customers.

Lawrence spent his retirement years collecting anything John Deere and Texaco. He also enjoyed singing and could whistle any tune. Family was very important to Lawrence, with him taking great pride in the accomplishments of his grandchildren. He was baptized at the Lutheran Church in Elk Horn, Iowa, and was a member of Immanuel Lutheran Church in Harlan.

The funeral service was held on Thursday, February 11, 2016, at Immanuel Lutheran Church in Harlan, Iowa, with Pastor Phillip Nielsen and Pastor Paul Reynolds officiating. Marge Ahrenholtz served as the organist and Diane Kastens was the soloist. Casket bearers were Andrea Ransom, Jamie Wright, Nicole Davolt, Krystle DeWolf, Tyler Davolt, Lawrence Rasmussen, and Adam Rasmussen. Burial was in the Harlan Cemetery, Harlan, Iowa, with graveside military rites conducted by the Helmer Reyelt American Legion Post #150 and the Shelby County VFW Post #941. Memorials may be made to Salem Lutheran Home in Elk Horn, Iowa, Immanuel Lutheran Church in Harlan, Iowa, or a charity of the donor’s choice. The Burmeister-Johannsen Funeral Home in Harlan, Iowa, was in charge of the arrangements. Condolences may be left online at www.burmeisterjohannsen.com.