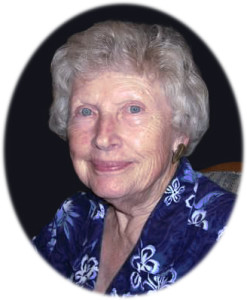 Mary Patricia Mortensen, the daughter of Tom and Georgia (Hicks) Flautt, was born on October 26, 1923, in Wichita, Kansas. She studied business at Washington University in St. Louis, Missouri, and then worked in Denver, Colorado. While in Denver, she met George Peter Mortensen; they were married on July 29, 1950, in Wichita.

In 1953, Patricia and George moved to Cumberland, Iowa, where they began farming. In 1957, they moved to Shelby, Iowa, and continued to farm; they retired in 1986. Following George’s death on March 14, 2004, Patricia remained on the farm.

Patricia was a member of the United Methodist Church in Shelby. She was active in the Shelby Garden Club, as well as various church and community activities. She enjoyed gardening and had received her Master Gardener degree from Iowa State University. Patricia was always a happy person who greeted friends with a warm smile.

Patricia Mortensen died on Saturday, January 9, 2016, at the Nebraska Medical Center in Omaha, Nebraska, having reached the age of 92 years, 2 months, and 14 days.

The memorial service was held on Saturday, January 16, 2016, at the United Methodist Church, Shelby, Iowa, with Pastor Nathan Tabelisma and Mr. Steve Kiesel officiating. Georgene Juhl served as the organist. The Burmeister-Johannsen Funeral Home in Shelby, Iowa, was in charge of the arrangements. Condolences may be left online at www.burmeisterjohannsen.com.