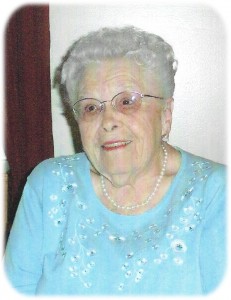 Adele Ruth Pedersen, the daughter of William Cleveland and Maude Pearl (Redington) League was born on October 18, 1915, in Walnut, Iowa. She attended Walnut schools and graduated from Walnut High School in 1933. She cleaned homes for various families in the Walnut area, and also babysat. On April 27, 1938, Adele married William Thompsen in Walnut. He died on February 18, 1972, in Harlan, Iowa. Adele then married Louis Hagner Pedersen in Griswold, Iowa, on July 31, 1976; he died on June 1, 1999, in Atlantic, Iowa.

Adele worked as a cook at Peace Haven in Walnut from 1966-1983. She lived in Walnut until moving to Fergus Falls, Minnesota, in May 2011.

Adele was a member of the First Presbyterian Church in Walnut. She enjoyed playing cards and was a longtime member of the 500 card club in Walnut. She liked to crochet afghans, dance, and sing for seniors. Adele loved to cook for her family, and also enjoyed her membership in the Garden Club.

Adele R. Pedersen died on Wednesday, June 10, 2015, at the Pioneer Care Center in Fergus Falls, Minnesota, having reached the age of 99 years, 7 months, and 23 days.

The funeral service was held on Monday, June 15, 2015, at the First Presbyterian Church in Walnut, Iowa, with Pastor Joel Jackle-Hugh officiating. Connie Jensen served as the pianist and Reva Drake was the soloist. Adele’s loving family served as casket bearers. Burial was in the Layton Towhship Cemetery, Walnut, Iowa. The Burmeister-Johannsen Funeral Home in Harlan, Iowa, was in charge of the arrangements. Condolences may be left online at www.burmeisterjohannsen.com.