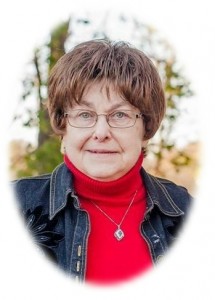 VISITATION DETAILS
Monday, April 6, 2015
5:30-7:00 PM
Congregational United Church of Christ
Harlan, IA
(get directions)
The family will be present to greet friends during the Visitation.
A Prayer Service will be held at 7:00 PM at the church.

Evelyn Ann Bergstrom was born at West Point, Nebraska on May 4, 1935, to Homer D. and C. Elizabeth (Prawitz) Thompson. She attended Wisner Public Schools, graduating in May, 1952. She served as Countess of Ak-Sar-Ben in 1953.

She received an Associate in Arts degree from Norfolk Junior College in Norfolk, Nebraska in May, 1954. During this time, she worked at the Norfolk church and in the Personnel Office at the Norfolk State Hospital. She married Charles Bergstrom of Ewing, Nebraska, on August 24, 1956.

They moved to Cumberland, Iowa, in 1959 where Charles taught at the Cumberland-Massena Schools. They moved to Harlan, Iowa, in 1962, where Charles taught high school mathematics. Evelyn worked as part-time secretary at the Congregational Christian Church before she began working full time at the Harlan Municipal Utilities in October, 1980 until her retirement in 1997. She returned to working part-time at the Congregational United Church of Christ until December, 2011. She taught Sunday School classes and enjoyed playing the organ and keyboard during Sunday worship.

Evelyn was a member of Eastern Star chapters in Wisner, Nebraska, and Cumberland, Iowa, a member of Shelby County Republican Women for several years, she served as secretary on the Myrtue Memorial Hospital Auxiliary, held offices of Vice President and President in the church Priscillas organization, and was an assistant Girl Scout leader while her daughters were in scouts.

The memorial service was held on Tuesday, April 7, 2015, at the Congregational United Church of Christ in Harlan, Iowa, with Rev. Donna Ewert officiating. Music was provided by Jim Thompson, Linda Boggs, and the Congregational United Church of Christ choir. The Burmeister-Johannsen Funeral Home in Harlan, Iowa, was in charge of the arrangements. Condolences may be left online at www.burmeisterjohannsen.com.